Perhaps one of the most important and exciting right available to the government employees and employees of some private companies is the leave encashment facility, for earned leave along with leave travel concession or LTC, that is the expenses incurred during the leave days. 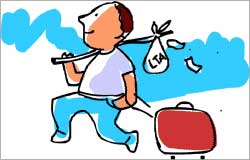 More often than not this facility is shrouded by many confusions and miscalculations. The following info will give you better clarity on the issue of leave encashment, its meaning, how it is taxed, and is it tax exempt on retirement and on resignation. Also included is the LTC provisions laid down by the Sixth Pay Commission. Read on.

What is leave encashment?

Simply put encashment of the paid leave that you have and which has not been utilized is called 'leave salary.' According to the Sixth Pay Commission's revised LTC provisions, leave travel concession is available to fresh recruits of central government offices and government officers.

The tax rules for leave encashment are treated differently depending on the two different instances. One, during your employment tenure, and two while you are leaving the company.

Irrespective of you serving the government or the private sector the leave encashed during your employment tenure will be taxed. But tax rules favour the government employees when the LTC is encashed while leaving the organisation. The entire leave salary is tax-free.

However, if you are employed with the private sector and encash your leave period while leaving the organisation, your leave salary is partly exempted (under Section10(10AA) up to the least of some conditions as mentioned in the Section.

Is the leave encashment exempt from taxes only on retirement?

No. According to Section 10(10AA) which uses the word 'retirement' in a wide sense to include all cases of retirement, whether on superannuation or otherwise, the exemption from taxes to the extent mentioned in the clause is applicable even if you encash your leave salary on retirement or resignation. This clause was enforced in a court judgment in 1997 that ruled in favour of the employee who had resigned from his services and went to claim the leave salary.

Leave encashment along with LTC: how it is calculated

The revised LTC provisions with leave encashment of the Sixth Central Pay Commission say that: "Government officers are allowed to encash ten days earned leave at the time of availing of LTC to the extent of sixty days during the entire career."

Also, while travel entitlements, for the purpose of official tour/transfer or LTC only on vehicles operated by the central/state government or a local body, will be the same, the Rule 12 of the revised LTC provisions has proposed a change that no daily allowance shall be admissible for travel on LTC.

Further the LTC provisions has left unchanged the present inclusion of both husband and wife who are Government servants for availing LTC, which will be encashment of leave equal to 10 days at the time of availing of LTC, subject to a maximum of sixty days each during the career.

India concerned over latest US aid to Pak