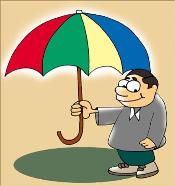 Starting with property insurance, the deductibles will rise, as insurance companies try to lower their underwriting losses. Under fire and engineering covers also, deductibles have been increased across segments.

Similarly, in case of advance loss of profit for companies that are engaged in managing or developing hydel projects, canals or dams, claims will be paid from the 46th day, instead of the sixth day at present.

In case of natural calamities-related claims from public sector insurers, a policyholder will have to pay Rs 25,000 while making a claim, instead of Rs 10,000 at present.

Insurance company executives said deductibles were expected to increase for other segments also in the new financial year.

General insurance companies had earlier increased deductibles on account of large losses from the risks underwritten by them. Since 2007, after deregulation of prices on fire and engineering policies, premium rates had dropped 80-85 per cent, as companies offered steep discounts to expand their portfolio.

"The industry has been facing huge losses after heavy discounts. We, at the industry level, have decided to increase the deductibles," said a senior executive of Oriental Insurance.

"There has been some prodding from General Insurance Corporation to improve underwriting profits. The rates have not yet stabilised. Since prices are competitive, insurers cannot increase premium rates. The only option is to increase deductibles. Almost all insurance companies are opting for the latter to improve productivity," said a senior executive at another public sector company.

Insurers have raised premium in some segments like group health insurance, which was earlier doled out as a freebie with property policies.