News
Business
Movies
Sports
Cricket
Get Ahead
Money Tips
Shopping
Sign in  |  Create a Rediffmail account
Rediff.com  » Business » A health insurance policy that covers you even after retirement!

A health insurance policy that covers you even after retirement! 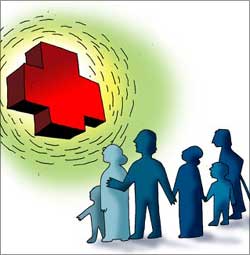 Are you concerned about health insurance after your retirement, when no longer covered under a company's group mediclaim policy?

Apollo Munich has asked for approval from the Insurance Regulatory and Development Authority (Irda) to launch Optima Vital, a 'top-up product over corporate medical cover', convertible to health cover after retirement.

To be eligible, one needs to be already covered, as an employee, by an employer-firm and below 58 years of age; if so, the new product gives the option of taking an additional 'top-up' coverage to the former, and then, just before completing 58 years (even if the retirement is later), opting to change this into full individual coverage.

Apollo would then do so without any extra fee or medical test.

Other insurance companies are looking at launching similar products. The move would help a large number of people who are often denied health cover once they cross 50 years of age.

This is despite an Irda directive to insurance companies to increase entry age for cover to 65 years and not to refuse a policy on grounds of age or load senior citizens with extra premium.

Insurance companies are, however, not eager to do so; both fees and tests get stiffer with age, especially after 50 years of age.

Usually, if someone wishes to buy health insurance in later life or after retirement, there is a waiting period, or the cover comes after various exclusions on "pre-existing diseases".

"It is difficult for anyone to go ahead and buy a cover at the age of 58 years. If you buy a top-up cover while working, you will have the option to convert it into a full-fledged policy when you retire, " said Apollo Munich's managing director and CEO, Antony Jacob, on the proposed scheme. "It takes away the worry of the person while retiring."

At present, apart from being reluctant to extend coverage for the elderly, many insurance companies do not even reimburse the cost of medical tests undergone during the process of checking or updating a cover.