Some interesting trivia on loans 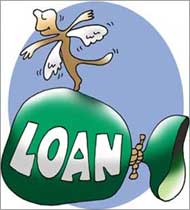 Practiced in an early form based on barter, loans took up the current structures with banks lending money much later.

Individuals who lent money on interest have played a major role in structuring our current banking system. The work 'bank' is derived from the Italian word banca meaning bench (they were then covered with green cloth) used by Jews in Florence during the Renaissance period. These early 'bankers' used to have their transactions over these benches put up in the market place.

When they closed up their business the 'bankers' used to breakup their benches as a symbolic gesture. This lead to the term 'bankrupt' (banca + rupta), though the application of the term is now-a-days more holistic not only applicable to banks.

The concept of banks however was practiced way back (over 5000 years ago) in the Mesopotamian civilization. These were predominantly temples where grains and precious stones were stored and traded.

One of the earliest practices of lending was the indentured loans in Europe. Unfortunately the same is practiced even now in some parts of India. Land lords and rich farmers used to give a lump sum of money to the needy for a marriage, buying cows, etc.

The borrower is supposed to pay off the loan by working in the farms of the land lord. The problem is that the principal never used to be covered up due to the accounting practices of the lenders. This effectively locks a family forever in the clutches of the lender.

A modified form of the indentured loan where instead of the service an actual interest is charged is in practice in most parts of the country. Here again individuals are the money lenders. Called in many names, the interest is very high. But the system serves (read as extorts) some segments with more vigor - typically the daily traders/vendors related to vegetables, eatables, cloth merchants (any push cart merchant for that matter) and farmers.

The system works on daily, weekly or fortnightly payment of loan and interest. The typical daily interest system works like this: The borrower (a vegetable & greens vendor) borrows Rs 1000 from the lender in the morning in the market.

The lender gives Rs 900 (taking the interest payable in advance). End of the day the vendor is supposed to return Rs 1000 as the principal. Seems simple, efficient and affordable!!!! The problem is with the interest charged. The interest charged in this transaction amounts to 11.11 per cent per day (4056 per cent a year).

Such systems are prevalent due to the lack of access to formal lending operations of banks at very low ticket sizes. The spread of micro-finance organizations is tackling this problem of extortion is a positive way in India and other countries across the world.

Chits - India's contribution to the world

The chit system of savings and borrowing has its origin in India. Called as ROSCA (Rotating Savings and Credit Association) in other countries, chits have been the backbone for safe saving and investing for the masses of India. Though cases of fraud has surface often reducing the comfort with the system, the system thrives because of its simple nature.

The effective interest rate in chits may be in the range of 12 to 20 per cent. But it gives the necessary capital without much paper work to start or expand a business. And many a times a chit is planned to borrow for a family expense / function like buying a vehicle or a marriage function. Now-a-days there are chits for purchasing even the Diwali sweets and gold jewellery.

Organised lending through banks has come of age in India. When there were hundreds of banks going bankrupt (some are declaring bankruptcy even now) in different parts of the world at the peak of the recent global financial crisis, India did not have even one incident. This speaks very well about our regulator (RBI) and its banking monitoring systems.

Traditionally banks have been in the business of borrowing money from people who have a surplus and lending to people who need money. The banks would charge a premium over the interest at which it borrows (interest rate spread) after covering for its various expenses (infrastructure, salaries, software, marketing expenses, etc).

In modern banks however the profit from core banking activities (borrowing and lending) is only about 1/3 of their total profits. The rest of the profits are got from the value added services and from treasury operations. Banking today is not as simple as it was in olden days.

There is tough competition for banks in their lending business from NBFCs (Non banking Financial Corporations). Some segments of loans have traditionally been with NBFCs one such is heavy vehicle lending (trucks and trailers). Another loan type which is dominated by NBFCs is the consumer goods segment.

Be it a washing machine, fridge, or even a laptop, one may find a NBFC lender being more aggressive compared to a bank. Personal loans was another segment which NBFCs started picking up in a big way, but due to the financial crisis may have existed this segment or have gone slow.

This is but a glimpse of a history that spans 5000 years that aims to give you a fair idea of how loans have shaped the financial industry and our society.
BankBazaar.com
Powered by