News
Business
Movies
Sports
Cricket
Get Ahead
Money Tips
Shopping
Sign in  |  Create a Rediffmail account
Rediff.com  » Business » Divestment: Will the govt speed it up?

Divestment: Will the govt speed it up? 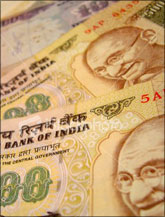 In her address to Parliament in June last year, President Pratibha Patil said the government will develop a roadmap for listing and people ownership in public sector undertakings (PSUs).

A few weeks later, the Economic Survey called for the revival of the divestment programme to generate at least Rs 25,000 crore (Rs 250 billion) every year.

The final push came when the finance minister, in his Budget speech, said, "Public sector undertakings are the wealth of the nation, and part of this wealth should rest in the hands of the people." As a result, after staying on the sidelines for years, meaningful discussions around divestment have started gathering momentum.

The divestment process, however, has remained a non-starter since its conception in 1991-92. The policy itself has changed a number of times, more due to political reasons than economic ones.

In the interim Budget of 1991-92, the government announced that it would divest up to 20 per cent in select PSUs in favour of mutual funds and financial and institutional investors in the public sector.

In 1993, the Rangrajan Committee recommended in favour of divesting over 74 per cent in public sector companies, except for industries reserved for PSUs, where it restricted the cap to 49 per cent. But the government did not take any decision.

After many such ups and downs, the UPA government in 2004, under the National Common Minimum Programme, favoured sale of a small proportion of companies' equity base through IPOs/FPOs.

It also constituted National Investment Fund (NIF) to channelise the proceeds of divestment; 75 per cent of the income from the fund was to be used to finance the social sector, while the rest was to be used to meet the capital requirements of PSUs.

Judging by the President's address, the government's intentions look clear. However, implementation remains an issue, as we have seen very little action on the ground.

Macro Money argues for a much more aggressive stance on the front. In fact, there is merit in the dilution of control in public sector companies, at least in areas where the private sector is vibrant (e.g., telecom, insurance and civil aviation). This will leave the government with the responsibility of regulation rather than execution, which the private sector has the ability to do more efficiently.

Also, in the current structure, the NIF needs to be sizeable to make any impact by spending the fund's earnings. A possible route under the current circumstances could be the listing of unlisted companies, and an aggressive selling of stake in listed companies.

As the government reduces its stake, over time, professional management gets to represent the shareholders, as is currently being practised in companies such as Larsen & Toubro and ICICI Bank.

What it means for you. It's a win-win situation for you as an investor and voter. The dilution of stake will help create a vibrant capital market. Currently, investors and fund mangers keep chasing a few large-cap liquid stocks.

The listing of PSUs will provide better diversification and the proceeds of divestment may be used to improve infrastructure. Better roads and ports will increase the efficiency and profitability of businesses.

There is, however, a word of caution in the entire process. The proceeds of divestment should strictly be used to create assets, or else, the entire purpose can get defeated.