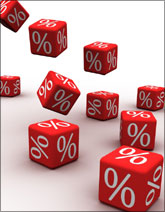 In an effort to bring more transparency in the loan markets and to give a better deal to small borrowers the Reserve Bank of India has put forth a new set of guidelines which will dictate the rates at which banks will be allowed to lend credit from April 1, 2010 onwards.

RBI has suggested a move away from the existing BPLR (Benchmark Prime Lending Rate) system to a more transparent Base rate system.

Although it may seem very ironical that the BPLR itself was introduced with the same motive of bringing more transparency to the business of loans, the truth is that it was twisted and tweaked by big borrowers.

The other issue was also that small borrowers were being forced to take loans at higher rates above the BPLR whereas big borrowers were getting better and cheap deals.

What is the base rate system all about?

RBI guidelines describe base rate as follows: 'The Base Rate system will replace the BPLR system with effect from April 1, 2010. Banks may determine their actual lending rates on loans and advances with reference to the Base Rate. Base Rate shall include all those elements of the lending rates that are common across all categories of borrowers. While each bank may decide its own Base Rate, some of the criteria that could go into the determination of the Base Rate are:

Unallocatable overhead cost for banks such as aggregate employee compensation relating to administrative functions in corporate office, directors' and auditors' fees, legal and premises expenses, depreciation, cost of printing and stationery, expenses incurred on communication and advertising, IT spending, and cost incurred towards deposit insurance; and

All loans given after April 1, 2010 will be calculated as Lending rate = Base rate + X. The variable 'X' will be based on parameters fixed by the banks which could include operating costs, duration of loan, risks involved, et cetera. This would also include charges relating to specific borrowers.

RBI has instructed the banks that the base rate should also be the reference point for products with a floating rate component. It also clearly stipulates that even in cases where the benchmark is an external rate, the rate at the time of disbursal of loan should be higher than the base rate.

How does it bring more transparency?

RBI has clearly stated that irrespective of the parameters based on which a bank fixes the base rate, the rate has to be clearly displayed at all branches and the websites of the banks. Any changes to the rate have to be promptly conveyed to the common public.

Banks have also been advised to inform the Reserve Bank of the minimum and maximum rates charged to their customers on a quarterly basis.

More importantly the central bank has warned banks not to lend below the base rate under any circumstances. This is seen as a move that will ensure that large borrowers do not use their purchasing power to squeeze very low rates of interest.

How will it help the common Indian?

The earlier rule stating that loans below Rs 2 lakh (Rs 200,000) have to be charged at above the BPLR rate has been taken off. This in effect means that small borrowers can now expect a lower rate of interest for their new loans. (Although it must be admitted that it seems very farfetched that banks will really give a very low rate for these loans as the 'customer specific' charges for low quantum loans are high enough to wipe off the savings generated by moving to the new system).

Higher credit flow could ensure that small borrowers can at least afford to ignore other stressful sources of funding like pawn brokers, etc.

What about existing loans?

The new system has been mooted for all loans given after April 1, 2010. Existing customers can have a discussion with the bank and finalise upon a mutually accepted rate based on the new system.

The new system will surely be a good sign for small borrowers but could give a few sleepless nights to big borrowers who could see their rates of borrowing move northwards. The first week of April 2010 could provide a clearer picture of how each bank tackles and implements the new system.

Till then here's hoping the credit flow picks up soon to help the Indian economy gain higher momentum towards growth.

BankBazaar.com is an online marketplace where you can instantly get loan rate quotes, compare and apply online for your personal loan, home loan and credit card needs from India's leading banks and NBFCs.
Copyright 2021 www.BankBazaar.com. All rights reserved.
Related News: BPLR, Reserve Bank of India, CRR, SLR
SHARE THIS STORY
Print this article