News
Business
Movies
Sports
Cricket
Get Ahead
Money Tips
Shopping
Sign in  |  Create a Rediffmail account
Rediff.com  » Business » Is it worth buying IT stocks now?

Is it worth buying IT stocks now? 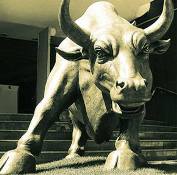 Since the big bear market started in January 2008, followed by the sharp recovery of 2009, Information Technology (IT) has been among the best performing sectors. Since January 2008, the Nifty is down about 20 per cent while the CNXIT index is up over 20 per cent.

This seems paradoxical since IT is not counter-cyclical. Most IT businesses have seen margin erosion and lower turnovers. Apart from currency volatility, there's still apparent weakness in the US economy, which is the major source of IT and Information Technology Enabled Services (ITES) revenues.

But there are at least partial explanations for this outperformance, and examining why IT was an outperformer may generate some insights. IT valuations were at more reasonable levels than the Nifty before the crash. The sector became very attractive in value terms later in the bear market.

By tracking CNXIT's average earnings per share (last four trailing quarters) through calendar 2008 to the present, we note that the industry saw around four quarters of stagnation before recovery started in the April-June 2009 quarter.

Most IT majors release advisories every quarter, along with results. These are generally considered credible and historically, appear a little conservative mapped against actual performance. Therefore, investors trust those advisories and make their projections accordingly. Surprisingly, the Satyam mega-scam didn't destroy investors' faith in the sector advisories.

Growth seekers often use a rule of thumb called the PEG (price-earnings- growth) ratio where the projected EPS growth (per cent) is divided by trailing PE. A growth industry is under-valued if the PEG is lower than 1. The CNXIT was below PEG 1 and considerably below PEG for most of 2009 at the least.

Another factor, which may have played a part in investor-support for the sector, was cash rich balance sheets. Most IT majors are debt-free, or close to it. That gives them more leeway to ride out a few poor quarters since they don't need external funding. Rate-sensitive industries such as real estate and infrastructure got hit much harder because of the global liquidity crunch.

In comparative terms therefore, IT enjoyed significant advantages during the recession. It had better valuations than most of the market and both PE and PEG ratios were consistently good. It also had stronger balance-sheets to offer during a liquidity crisis. This was enough to make it a defensive winner even though it's not counter-cyclical.

However, the situation has changed after the Oct-Dec 2009 quarter. IT industry advisories have improved considerably and most IT companies are back in hiring mode.

Valuations have risen too though the past three weeks has seen a correction of about 7-8 per cent. .

Is the industry worth buying into at PE23; The PEG ratio is still just about ok  it is hovering at around 1 now. The balance-sheets are still debt-free. The US recovery may be muted but the worst appears to be over.

But the valuation story is reasonable now  it's no longer compelling. There's no margin of safety at 23PE if the advisories turn out to be optimistic. It would start looking attractive below PE 20. Also, in comparative terms, growth could accelerate faster in many other industries and debt-driven growth for highly-leveraged businesses is no longer so difficult to envisage.

Maybe it's time to cut back some IT allocations and to buy into the overall market instead. This rebalancing would mean selling CNXIT (or its constituents) and buying Nifty (or its constituents). The arbitrageurs have been advising similar "paired-trades" since mid-January when the divergence in CNXIT and Nifty returns became quite large.

The idea is, if the underperforming Nifty is bought and the outperforming CNXIT sold, the position gains as the differential between the two indices narrows. Since the CNXIT and Nifty are correlated fundamentally, this narrowing should occur in the long run. So far, this paired trade has gained.