Life should have been easy for Deepak Mishra, an advertising professional. Three years ago, when he joined an agency, his monthly take-home salary was Rs 25,000. He had no dependents and liabilities. 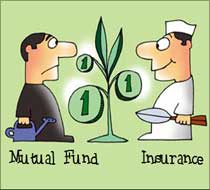 At present, his financial situation is in doldrums. And, not because of a job loss or a pay cut. His monthly take-home salary has, in fact, touched Rs 50,000. But his three bank accounts have only Rs 2,000 in them.

If his company deposits the salary in his account even a couple of days late, he panics because his credit card issuers start calling up. Due to this financial mess, his girl friend of five years is unsure about marrying him. Worse, he even owes her money.

This is not an isolated case. A number of young professionals find themselves in a financial mess within the first few years of their careers. Reason: Reckless spending, often under peer pressure.

For instance, in October 2008, when Lehman Brothers filed for bankruptcy in the US, around 1,200 employees in its business process outsourcing unit in Mumbai got the jitters.

There were reports about how many of them had rented expensive flats near the office and purchased latest gadgets. Their monthly outgo due to rentals and equated monthly instalments was significant. Thankfully, Nomura Holdings took over the unit.

While salaries of newcomers have gone up in recent years, so have spending avenues. As soon as one gets a job, and in some cases even before the appointment letter arrives, credit card companies start calling up for issuing cards. So, spending begins even before the first salary is credited.

Mishra has already run up bills of over Rs 50,000 on his two credit cards. The money was spent on replacing mobiles (three in one year) and laptops (two in the past two years).

Faced with this situation, he decided to clean up his act. The first thing his chartered accountant told him to do was to get rid of his debt and create a contingency fund. Mishra started with using 30 per cent of his salary to clear his credit card debt. For all other young and single people, here are a few other steps they need to take at the start of their careers.

Contingency fund: For someone like Mishra, it is imperative to keep 25 per cent of the salary in an account he will not dip into. In one year, he would have three months' salary in the fund.

One could also invest in short-term debt funds for additional returns. This fund would help a person see through situations like temporary unemployment and disability.

Monthly budget: It is imperative to have a monthly budget. This amount should not be more than 40-50 per cent of the salary, including the house rent. "Budgeting is important as it gives an idea about expenses towards different needs so that there is no overspending," said Radhika Gupta, co-founder, Forefront Capital.

Keeping a record helps one identify expenses that can be cut. For instance, weekend visits to malls to watch movies and shopping can be restricted, especially if the finances are in bad shape.

Keep your credit cards at home: Yes, that latest jacket and mobile phone look great. But, if you do not have cash, don't buy. Says Lovaii Navlakhi, founder, International Money Matters: "Credit cards always lure to spend and, in most cases, spend more than capacity."

In addition, the costs are high. "Delayed credit card payments lead to high penalty, sometimes in excess of 40 per cent. Using more than one card is likely to get a person into a debt trap," said Gupta.

Insurance: Since at the outset of one's career there aren't any dependents, a life insurance policy may not be needed. "Loss of life at this age causes more emotional grief to parents than financial," said a financial planner. However, medical and accident insurance is a must because hospitalisation and other medical bills are then taken care of by the insurer.

Invest systematically: Once the contingency fund is in place, use the money to start investing in equities through systematic investment plans of mutual funds. This will help create wealth over a long period of time.