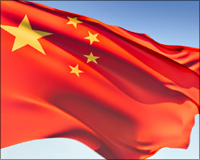 China has zoomed past the United States as the world's biggest auto maker and market with sales exceeding 13.64 million units last year, an industry association said in Beijing on Monday.

The industry would continue to see rapid growth in the next decade as it had become a pillar of the national economy, Dong was quoted as saying by Xinhua news agency.

To spur the use of clean and fuel-efficient cars, the Chinese government announced in January last year that it would halve the purchase tax to 5 per cent on vehicles with a displacement of less than 1.6 litres.

Delhi auto expo to be the world's largest