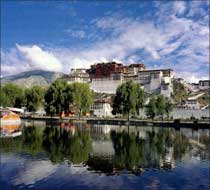 China plans to build the world's highest airport as part of a yuan 100 billion investment in Tibet in the next four years.

The new airport to be built in the Nagqu prefecture -- near the middle of the Tibet-Qinghai plateau -- will be higher than Tibet's Bamda facility.

The airport, to be located about 230 kilometers (140 miles) north of capital Lhasa, will be the sixth in the remote region.