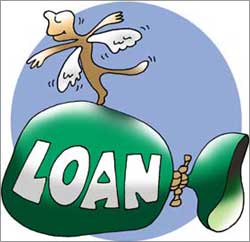 Rachna had just started working as a junior manager in an MNC. She had long dreamt of owning her own house. She approached her bank manager, who told her to go for a step-up scheme provided by the bank for the home loan borrowers. She was quite confused about the scheme. Accordingly her bank manager explained the scheme to her, which is as follows.

Step-up scheme: Normally you repay your home loan in the form of equated monthly installments. But under the step-up EMI scheme, the EMIs in the initial years is quite low. But as time passes and the borrower's income increases, the EMIs will also increase. As Rachna had just started her career, and as she was on the threshold of a bright career, this scheme was appropriate for her.

Benefits: As the repayment burden is low during the early years, it is suitable for those who have just started their careers. It also raises the loan eligibility of the borrower. Also since the majority of the early installments go towards interest payment, the borrower can enjoy tax benefits for a longer duration. As interest on home loan provides tax benefits, the cost of borrowing goes down. The savings can thus be deployed in investments offering higher rate of return.

In case if Rachna decides to get married, she can club her income jointly with her husband. In that case, she can get a higher amount in the step-up, thus allowing her to move to a bigger place. This increase could be as high as 5-30%, depending on the industry, designation and age of Rachna and her husband.

The step-up scheme can be implemented in different stages. In certain instance there are 2 phases, one lower and other higher. In other cases, it is a gradual system. It can be carried out annually, after 5 years or at any time intervals. Some step-up schemes from certain banks offer fixed interest rate, but these loans are costlier than those with floating rate.

Drawbacks of this loan: For people like Rachna, who have just started their career and have the prospects of earning more in future can avail of these loans. But Rachna needs to understand that in this type of scheme, the interest rate risk is quite high.

Also Rachna may not get the salary increment as expected. She and/or her husband may be laid off from their current jobs. They may get divorced or may be transferred to other parts of the country or even abroad.

Hence Rachna must acquaint herself with these drawbacks before opting for this scheme.

Should you opt for it: Be sensible when estimating the quantum of future increment. Use inflation + 1-2 percentage points as your expected increment. This will help you predict how much you can pay in future.

If you decide to go for this loan, select fixed rate option instead of floating rate option, as it will let you control your EMIs. Besides avoid over-borrowing on this kind of a loan, to prevent financial problems later on.

BankBazaar.com is an online marketplace where you can instantly get loan rate quotes, compare and apply online for your personal loan, home loan and credit card needs from India's leading banks and NBFCs.
Copyright 2021 www.BankBazaar.com. All rights reserved.
Related News: Rachna, EMI, MNC
SHARE THIS STORY
Print this article