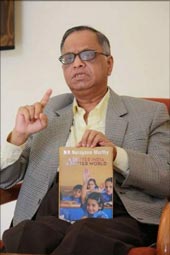 Catamaran Venture Fund, set up by NR Narayana Murthy, the chairman and chief mentor of Infosys, has made its first investment. The fund, with a corpus of about Rs 600 crore (Rs 6 billion), is understood to have invested a little over Rs 28 crore (Rs 280 million) in SKS Microfinance.

Murthy's fund, which has invested through Catamaran Management Services, will hold 1.3 per cent in the company after the IPO.

Arjun Narayanswamy, who heads the fund on behalf of Murthy, said, "I am not at liberty to talk". In spite of repeated attempts, Vikram Akula, founder & chairman of SKS Microfinance, could not be reached. A text message sent on his mobile number remained un-replied. In October last year, Murthy had raised about Rs 600 crore by offloading a part of his holding in the company.