Factors to consider before buying Ulips

Recently, there were a series of advertisements by the Insurance Regulatory and Development Authority - the first of its kind by any regulator - promoting unit-linked insurance plans and term plans. 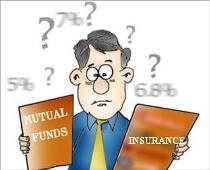 One such advertisement - Be wise, Ulip wise - caught the attention of many. Reason: For years, financial planners have complained that Ulips neither provide enough cover or returns. Instead, by combining the insurance and investment, it actually confuses the buyer.

The advertisement, on its part, also went on harping on the same old lines. That is, Ulips can give great returns over time and conveniently, missed critical factors like high and complex cost structure. Here are some things to look for before buying any Ulip:

The Irda advertisement is completely silent on this, but cost is one of the most important factors, when making any investment decision.  Life insurance companies charge anywhere between 10 -80 per cent as premium allocation charges in the first year. In fact, some Ulips use the entire 100 per cent as PAC. In the next couple of years, the cost drops sharply to 2-10 per cent. Not a cheap option, if you consider that there's zero entry load on mutual funds. Of course, from the fourth year onwards, there is a very low PAC.

While, the erosion in wealth was attributed to stock market crash, high costs also added to his woes. Forget returns, products with a PAC of 25-30 per cent or more will take several years to just break even.

Additionally, couple with high costs, it is be complete disaster. Say, you put in Rs 1 lakh in a policy with 30 per cent PAC. The actual amount invested is only Rs 70,000 (for the sake to simplicity, we are considering that all other charges are zero and the entire amount is being invested in the stock market)

Besides PAC, there are several other charges such as product administration charge, mortality rate, fund management charge and others. Worse still, the way these charges are calculated is very complicated. That is, some of these charges are deducted by cancelling the units and others are deducted from the net asset value. So, while the NAV may be very high, the lack of units reduces the policy value.

No history of performance: If one does a simple calculation, one would be quite surprised with the numbers. Say, a 35-year old purchases an Ulip with an cover of Rs 1.5 million (Rs 15 lakh) in 2002. The plan puts 65 per cent in debt and 36 per cent in equities. The premium for this plan would be Rs 75,000 a year.

After seven years, his current fund value is Rs 7 lakh. If he had bought a term plan of Rs 15 lakh, the premium would have been Rs 5,500. Assuming, he had invested the rest Rs 69,500 in 35 per cent debt and 65 per cent equity, he fund value would be Rs 9.5 lakh.  The difference of Rs 2.5 lakh is primarily because of an extremely high first years' PAC (65 per cent) and around 5 per cent from the second year onwards.

Of course, it should be appreciated that the Irda has taken the onus of itself for promoting insurance products. And, it has been promoting term plans too. But Ulips as a product is the last thing that most people need. For one, it is too expensive. Two, it adds to the confusion of the buyer rather than simplifying his life. Importantly, it neither provides adequate cover or returns. A point that most buyers should look at before making the decision.

The writer is director, My Financial Advisor

All you need to know about ULIPs