News
Business
Movies
Sports
Cricket
Get Ahead
Money Tips
Shopping
Sign in  |  Create a Rediffmail account
Rediff.com  » Business » 'Gold to give 15-20% returns for next 5 years' 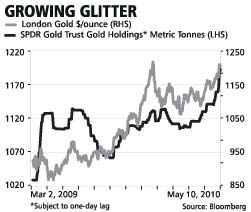 With gold scaling all-time high levels and now trading at $1,241 per ounce, questions arise whether this is the right time to book profit from investment in gold or time to invest more.

The answer lies in the reason which led gold prices to this level. Experts suggest there is steam still left for quite a while in gold.

Gold prices saw a sudden spurt internationally in recent days as the crisis in some European nations deepened. Investors became risk-averse and reduced their investments in most asset classes, hedging portfolios by buying gold.

Prices went up nearly $130 in just a month and are currently at all-time highs. During the weekend, when a trillion-dollar bailout package was announced by European nations, gold shed some gains as most other asset classes, including equities, went up sharply.

However, when markets found the rise in equities was due to unprecedented short covering, the risk appetite faded.

Since then, gold prices have zoomed again, as investors believe a bailout package itself might bring in more problems.

"Investors are concerned at the fact that more debt is being created for bailing out economies already facing huge debt. This means the debt scenario is worsening and investors felt the need to hedge portfolio by buying gold," said Sanjiv Arole, an independent bullion analyst.

The yellow metal's traditional role is one of a 'safe haven', a place where participants turn during times of acute stress in markets. Gold's popularity has grown, as most investors feel any sustained recovery from the recent worldwide economic downturn will be a long-drawn process.

Barclays' commodities' analyst says, "The uptrend in gold still looks strong. The two key drivers of investment interest in gold are general concerns about the stability of the global financial system (stimulating safe haven buying) and the risk of currency debasement/inflation (gold as currency hedge). While the first of these concerns may have been eased by the massive EU/IMF rescue plan, the second has arguably been heightened by it."

In many European countries, off-balance sheet debt is also high, though the quantity is not known. So, the crisis may be deeper than it looks.

In the overall context, analysts believe the future for gold looks good. GFMS, the London-based bullion research firm, had said recently that gold had potential to go up to $1,300 in the near-term but post that, correction is due.

In the long run, Ritesh Jain, head of fixed income at Canara Robeco Mutual Fund, says: "Gold will continue to give 15-20 per cent return for at least the next five years."

His logic is that gold has found place in most investors' portfolio and volatility in markets will keep gold an attractive asset class. Bailout packages could be inflationary and changing currency dynamics will be conducive for a gold rally in the medium to long term, too.

Karvi Private Wealth analysts believe gold prices are likely to average $1,200 per ounce on Comex and Rs 17,900 per 10g in domestic exchanges for the next six months.

Technically, too, the trend is bullish. Barclays' analyst says, "Our technical strategists expect steady gains initially only to the $1,240/50 area. Beyond that, the next set of meaningful targets is around $1,350/74."

Barclays to boost workforce by 10% in Asia