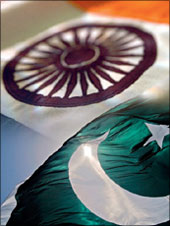 The corporate leadership of India and Pakistan on Wednesday strongly urged the two governments to take all necessary steps to realise the tremendous potential of trade and commerce between the two countries.

The meeting noted with concern that South Asia is the world's least economically integrated region.

The entrepreneurs and CEOs of the two nations were meeting in New Delhi under the auspices of the Aman ki Asha initiative launched by the Times of India Group and the Jang Group.

Finance Minister Pranab Mukherjee, in his inaugural address, too stressed the strong linkage and interdependence between peace and sustained economic growth and development of the two countries.

Industry leaders of both countries agreed that economic cooperation is crucial to peace and progress in a region that has the highest concentration of people living below the poverty line.

The business leaders resolved to aggressively pursue the benefits of economic cooperation and recommended the following:

1. Six sectors were identified as having the highest potential:

Textiles: The largest employer in both countries - potential exists for the export of home textiles from Pakistan to India while a huge market exists in Pakistan for India's polyester textiles.

Information Technology: the fastest growing sector in both countries and the easiest area to cooperate in, given its virtual nature. India can collaborate with Pakistan, which can provide skilled resources at competitive rates.

Agriculture: Considerable potential exists for trade through streamlining logistics and storage facilities. India and Pakistan can also collaborate on research for improved yields in, and greater export for, both countries.

Healthcare: Poor health infrastructure is a common problem. Opportunity for collaboration exists in research and combating the three major diseases in both countries -- heart, diabetes and cancer.

Energy: India and Pakistan have huge untapped reserves of energy.  Collaboration can lend impetus to accelerated growth and development in both countries, which have a huge appetite for energy.

Education: Given the low average age in both countries (18.2 years in Pakistan and 22.5 years in India), education and skill development is an area of immediate concern and potential. Cooperation and sharing of strategies in education is the best investment that both countries can make.

2. Committees comprising business leaders from both countries were established for the IT and textile sectors. Similar committees for other sectors are in the process of being set up.

3. In addition to the promotion of bilateral trade, the business meet proposed that specific steps be taken to change public perception and remove the existing mistrust.

4. Visa: Easing visa restrictions and simply letting people meet is the single greatest step the governments can take,that will have the greatest impact in all areas of concern. Business visas particularly need to be facilitated.

5. Telephone connectivity: India and Pakistan are probably the only two neighbouring countries in the world that disallow cell-phone roaming facility. The business and media representatives resolved to lobby against this unnecessary and counterproductive restriction.

The meeting agreed to set up a permanent secretariat to follow up all on these recommendations. It was unanimously agreed that the next economic conference would be held in Pakistan on a date of mutual convenience.

Top US officials on way to Pak to talk terror