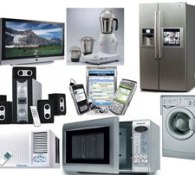 While demand for consumer durables has been growing fast, investors need to be selective as stock valuations have risen even faster.

The rising demand for white goods (refrigerators, washing machines, air conditioners, etc) - as reflected in the year-on-year growth of these products in the Index of Industrial Production (IIP) over the last few months  has led to a surge in investor interest for listed companies in the sector.

The BSE consumer durables index (with over 41 per cent weightage for white goods manufacturers) has grown nine per cent over the last one week and about 77 per cent over the year, compared to the Sensex's gains of 1.76 per cent and 17.52 per cent during the same period.

The four companies in the index - Videocon, Whirlpool, Blue Star and Bajaj Electricals - have seen their share prices jump 38-80 per cent since their May-June lows.

Analysts tracking the sector do feel sales will continue to be strong. But, going ahead, profitability might take some hit due to rising raw material costs.

As a segment, consumer durables will see a growth of 17-18 per cent annually and will reach the Rs 60,000-crore (Rs 600 billion) mark over the next five years, according to research firm Crisil.

In addition to a jump in demand that will spur volumes, a change in companies; product mix is a key reason for the value growth in the sector, says Sridhar Chandrasekhar, head, Crisil Research.

Some examples are the increasing purchases of LCDs compared to flat CRT screens, the transition from semi- to fully-automatic washing machines, and from window ACs to split ACs.

A large part of the increase in demand has been due to increasing disposable incomes and the fact that consumer durables are no longer considered discretionary but essential goods.

The rising trend of nuclear families, urbanisation, white goods' stable or lower prices as well as higher incomes are leading to this growth, too, says an analyst.

The increased sales, however, is not likely to result in a similar improvement in profitability as margins are expected to decline during the current financial year due to the rise in prices of such inputs as steel and aluminium.

While raw material producers have affected price hikes in the month of September, analysts say manufacturers of white goods have not been able to fully pass on the price hikes due to severe competition and the need to maintain market shares.

While the outlook remains good, valuations have crept up due to the sharp spike in share prices of companies (market cap of Rs 3,000 crore or more).

Five companies (including Voltas, which is not a part of the index but is a major company in the industry) grew their revenues 13-40 per cent year-on-year in the June quarter. Operating profit margins, however, fell for these companies, largely on account of the higher raw material costs.

Among companies, analysts prefer Whirlpool as it is a pure play on the white goods sector with return ratios (Return on Equity - RoE, and Return on Capital Employed - RoCE) of over 40 per cent, strong brand and distribution strengths.

They expect its net profits to grow over 30 per cent annually in the next two years. Their advice is to buy on dips.

Bajaj Electricals gets about three-quarters of its revenues from consumer durables and lighting products and is the leader in the small appliances market.

Its tie-ups with such foreign majors as Morphy Richards and Nardi allow it to compete in the premium market against players like Philips and Kenstar.

In addition to the good growth in consumer businesses, a strong order book in the engineering division will ensure a 30 per cent annual growth in revenues and profits over the next two years. The stock is attractively priced at current levels.

Voltas' strong market positioning in the cooling products segment is likely to help the company boost its revenues, believes CLSA. The research firm says, given low penetration levels and increasing affordability, ACs will see a growth of 30 per cent a year.

Successful branding efforts and a 25 per cent increase in dealer network has helped the company grow its market share.

Powered by its cooling products business, analysts believe earnings are likely to grow 20 per cent over FY10-12. The stock, however, is trading at a premium. So, buy on dips.

Videocon, the largest player in the listed white goods segment, derives 90 per cent of its sales from the consumer electronics business. Analysts expect the company to report a 23 per cent growth in sales for the year ending September 2010, against a seven per cent decline in sales in the previous year.

After a sharp fall last year, net profit is expected to rise by over 50 per cent in the current fiscal. The stock is the cheapest among the large size players and is attractive.

FDI in retail may bring down prices: Crisil