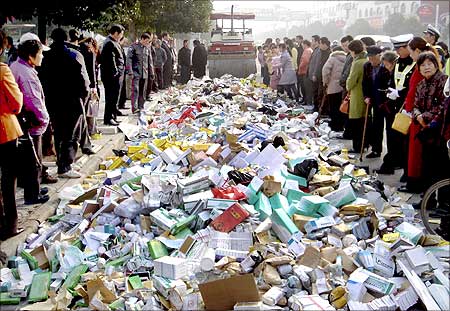 How sure are you that the pill you are taking is genuine? With counterfeit drugs all over the place, one can't be sure about the quality of the medicine. A pill that is supposed to cure you would actually kill you...

Product of a billion-dollar deadly business, fake drugs kill millions of people across the world. It is estimated that 1 million people die in the developing world annually after consuming these counterfeit drugs.

Fake allopathic and homeopathic medicines contribute between 15 to 20 per cent of the Rs 40,000 crore (Rs 400 billion) Indian pharmaceutical market.

Fake drugs were initially found to be among lifestyle drugs like Viagra or common medicines for cold and fever.

Today, the business has spread to cover lifesaving drugs treating AIDS, diabetes, cholesterol, and even cancer.

The consequence of this: serious defects and deformities, lifelong impairment and even death. These drugs also create mutant strains of virus.

The World Health Organization (WHO) estimates that more than 30 per cent of medicines sold in Africa, Asia, and Latin America are spurious.

Several seizures have found that the fake drugs have a 'Made in India' tag. 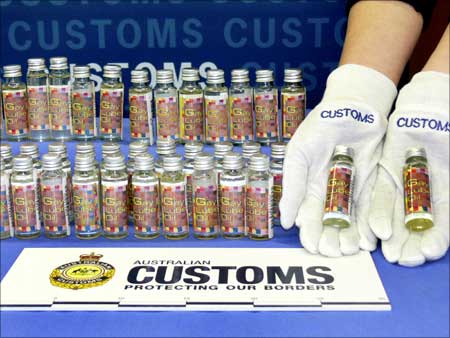 Shocked by the surfacing of fake Chinese medicines with 'Made in India' logo in Africa, the Indian government has asked its missions in the region to step up vigil for protecting the nation's image and market.

Taking serious note of the action by unscrupulous elements to malign Indian generic pharma industry, Embassy of India, Beijing, has been requested to lodge a strong protest with concerned Chinese authorities and also to impress upon them to take stringent action against such unscrupulous elements," said a commerce ministry statement.

According to industry estimates, global sales of counterfeit drugs are expected to reach $75 billion by 2010, a more than 90 per cent increase from 2005.

After a recent seizure of fake drugs in Nigeria, which were carrying 'Made in India' label but were allegedly manufactured in China.

India has taken the issue very seriously as this could damage the reputation of the Indian pharmaceutical industry in the global market. 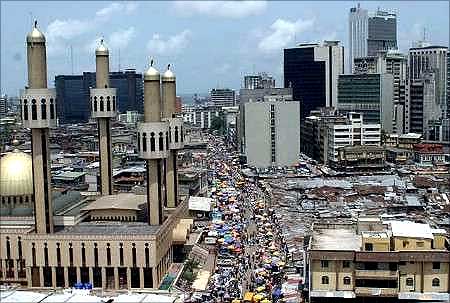 The National Agency for Food and Drug Administration and Control (NAFDAC) of Nigeria said a large consignment of fake anti-malarial generic pharmaceuticals labelled 'Made in India' was found to have sourced from China. A test of a recent consignment of anti-malaria drugs Maloxine and Amalar tablets proved these were fake.

The Nigerian authorities plans to introduce a drug testing equipment known as 'Truscan' and a survey of all drugs on sale and make a data bank with identification marks and differences between genuine and fake drugs.

The NAFDAC has blacklisted more than 30 Indian and Chinese companies for exporting fake drugs into the country.

India has also raised the issue with China. Although China has assured of investigations in the matter, Indian authorities have not been given any time frame.

A consignment of fake drugs from China was confiscated at the Chennai port recently. Several Indian agents collude with the Chinese to engage in this trade.

China has a booming unregulated pharmaceutical industry, with many illegal manufacturers of spurious drugs.

In 2006, nearly 100 people in Panama died after consuming a toxic cough syrup that originated from China. 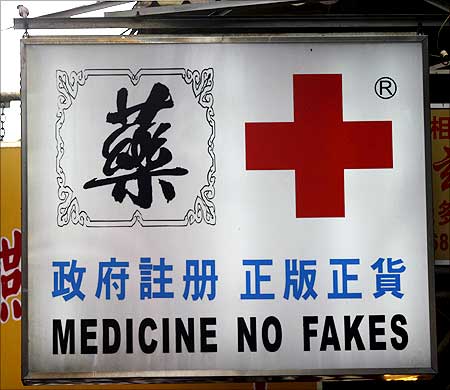 Image: A sign advertising that the drugs sold in the shop are government registered and not fake hangs outside a chemist in central Macau.
Photographs: Russell Boyce/China
One reason for the unabated growth is the lack of controls on the distribution and supply. Poverty, high cost of medicines, poor legislation, easy access to printing technology, ineffective law enforcement boosts the activities of counterfeiters.

It is difficult to keep a tab on counterfeit drugs in Africa, one of the worst-hit continents, as most of the medicines find way to the interior regions.

Besides, most of the African countries do not have a well-knit mechanism to check spurious imports. However, fake drugs have made their way even into the United States, one of the major markets.

Most of the drugs bought online are said to be counterfeits. The cheaper prices make them more popular. Counterfeit drugs are mostly distributed in small towns and rural areas in India where it is difficult to keep a tab.

India has toughened the punishment for those who make or sell counterfeit drugs with the introduction of a minimum 10-year jail term or a life sentence, depending on gravity of the offence.

But there are many loopholes in the system which let the trade flourish, endangering many lives.

Recently, the USFDA said Ranbaxy's drugs were of sub-standard quality and banned import of 30 its drugs in the United States. 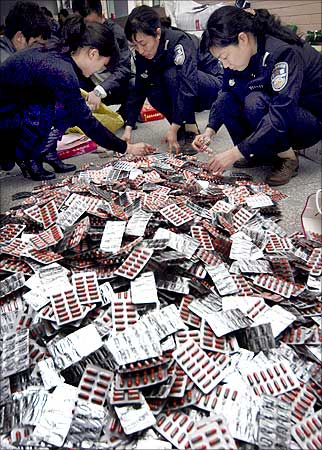 Image: Police check confiscated fake drugs after they smashed a counterfeit gang in Xuchang, Henan province
Photographs: China Daily/Reuters
Most of the drugs bought online are said to be counterfeits. The cheaper price tag make them more popular.

Counterfeit drugs are mostly distributed in small towns and rural areas in India where it is difficult to keep a tab.

India has tightened the punishment for those who make or sell counterfeit drugs tightened with the introduction of a minimum 10-year jail term and and life sentence depending on the offence.

But there are many loopholes in the system which let the trade flourish endangering many lives.

Recently, the USFDA said Ranbaxy's drugs were of sub-standard quality and banned import of 30 its drugs in the US. 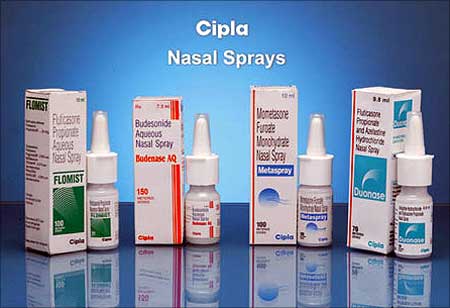 The problem of spurious and sub-standard drugs has dented the image of the Indian pharma industry. With no quality checks, no data on the number of small scale units making medicines, the total market size or the location of such drug units, the trade is growing unchecked.

The fake drugs are copies of well-known pharmaceutical brands but the contents turn out to be deadly. The medicines look genuine with good packaging so it is easily passed on as genuine drugs.

Some capsules are filled with lactose, starch, chalk and dust, ink from computer printers, expired drugs are repackaged in new packets, injection vials are filled with spurious medicine, all to make quick money at the cost of many lives.

There are several ways of producing counterfeit drugs. Some counterfeiters work for pharmaceutical companies, use substandard ingredients in the drugs and sell the medicine to unscrupulous agents.

Others are based in interior locations, in shanties where chemicals, other ingredients are mixed and sold in good packets. Some add several right ingredients so that the drugs get cleared in chemical tests. 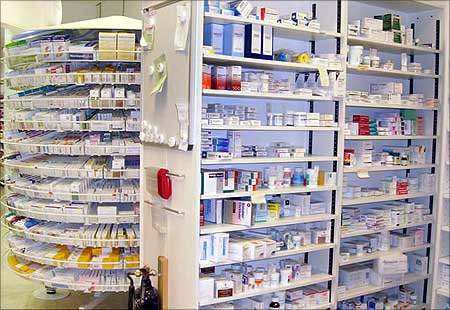 India exports around $7 billion worth of generic pharmaceutical products and Africa accounts for a sizable portion of this.

Indian drug companies such as Cipla, Dr Reddy's and Aurbindo Pharma have increased their shipments to the region and are posing a challenge to the multinational firms for which Africa is considered as a traditional market.

India's pharmaceutical market is $10.7 billion with 95 per cent comprising the generic variety.

India's exports of pharmaceutical products reached $7.79 billion for the period April to February 2009 period growing at almost 19 per cent, compared with same period during previous year.

While the pharma market booms in India, the parallel network of counterfeit drugs, continues to dent India's image, risking lives across the world.

A regular drug quality monitoring system, strict enforcement of laws, awareness among people and vigilance can mitigate this problem.

Unless the laws are enforced and loopholes are plugged, this trade will continue to boom imperilling millions of precious lives.