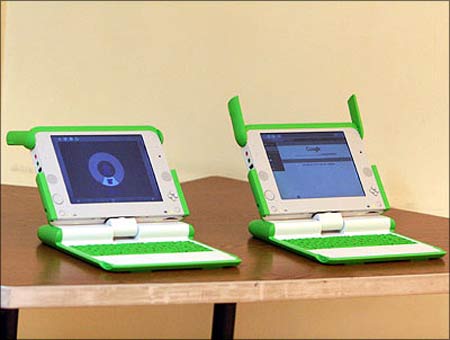 The '$10, world's cheapest laptop', developed in India has been given a quiet burial with the government placing an order for 250,000 XO laptops from the Nicholas Negroponte-led One Laptop Per Child (OLPC) Foundation.

The $10 'laptop' had turned into a major bone of contention with the global IT industry and experts blasting the device that was earlier projected as a challenger to the $100 laptop of the OLPC project.

Meanwhile, Satish Jha, OLPC India president and CEO, was quoted in the media as saying that the OLPC XO laptops "have been ordered for 1,500 schools (throughout the country) and the deliveries will begin in June." 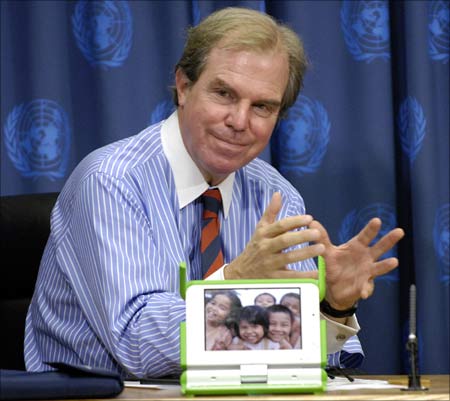 Image: Nicholas Negroponte, Professor and Chairman Emeritus of the Massachusetts Institute of Technology, shows a model of the $100 laptop computer he developed for the One Laptop per Child (OLPC) nonprofit group.
Photographs: Chip East/Reuters

The OLPC project had not taken off in India as the government was unsure about the excellence of the technology involved, the hidden costs, and whether it was safe for kids to use it for long periods of time.

Meanwhile, 20 OLPC XO machines were distributed at a school in Khairat-Dhangarwada village of Maharashtra, as a test case.

However, the government remained unconvinced, especially about the cost of the XO laptop which were earlier targetted to cost only $100 but by the time they were ready to enter the market the cost had gone up to $188. 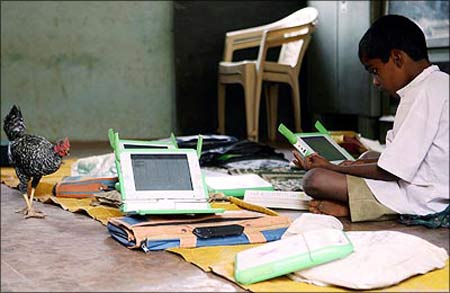 After the Indian government rejected the XO laptops, OLPC has been speaking to various state governments and private sector companies in India hoping that the industry might buy and donate these XO laptops to schools.

The XO laptops are tough and employ open source computing. These energy-efficient laptops have 'a built-in wireless and a dual-mode display that is readable under direct sunlight.'

Soon the Ministry of Human Resource Development commissioned a new project -- Saakshat -- which was to look at the development of a very low cost laptop. 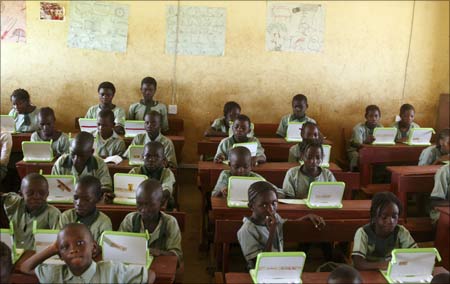 The world's cheapest laptop, which was said to have been jointly developed by several organisations, such as the University Grants Commission, the Indian Institute of Technology-Madras, and the Indian Institute of Science, Bangalore, was to be priced at around $10 to $20 (about Rs 500 to Rs 1,000), Indian officials had said when the device was launched on February 3 this year.

However, both the IIT-Madras and the IISc Bangalore had denied having been a part of the project.

The project had created a buzz in the IT industry across the world. The Saakshat 'laptop' was 2 GB onboard memory with wireless Internet connectivity. To make it useful for the students, especially in the rural areas, the scientists were said to have it a low power-consuming gadget. 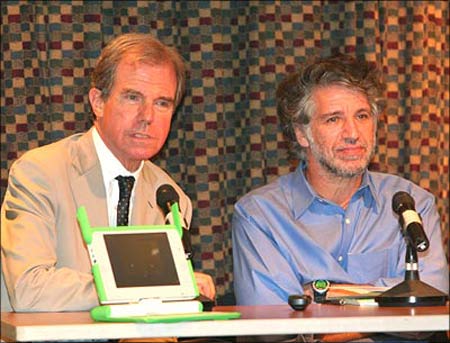 The Saakshat laptop was a 10-inch-by-5-inch plastic box which, despite its high-profile unveiling at Sri Venkateswara University in Tirupati, was more like a storage device.

The device was aimed at improving the skills of students, both at the school and higher levels. Under the mission the government intended to provide high-speed Internet access to the schools to download e-books and e-journals and other material. It was to be ensured that students were able to download material through the Saakshat portal. 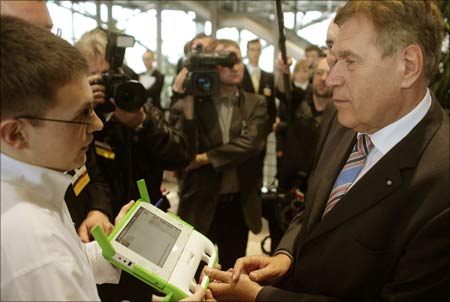 Image: A student presents to German Economy and Technology Minister Michael Glos a $100 laptop during the national IT Summit in Hanover.
Photographs: Hannibal Hanschke/Reuters

The $10 laptop was being seen as India's reply to One Laptop per Child's XO and Classmate of Intel. The XO, created by scientist Nicholas Negroponte and MIT Media Lab was originally targetted to cost only $100 but by the time it was ready to enter the market its cost went up to $188. The Classmate notebook PC from Intel was priced at $300 a piece.

Nicholas Negroponte, father of the OLPC XO, however was not fully satisfied with the cost projection. "I fear it is not serious. We'd love a $20 laptop but the display costs more," he was quoted as saying by the Boston Globe.
More
Print this
article
ALSO
READ
MOST
RECENT