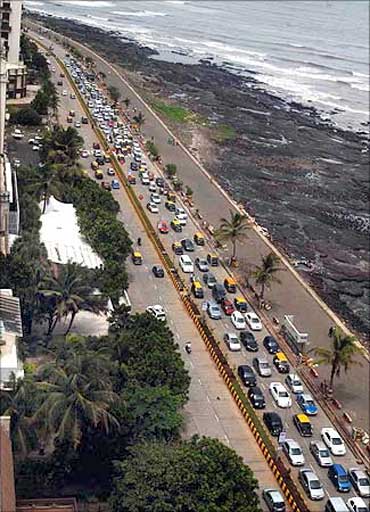 Image: A traffic jam near the sealink in Mumbai. Traffic snarls are a very common sight in Mumbai too, but the metropolis is not in the list of cities surveyed.

"Life is too short for traffic." Dan Bellack

Are you sick of being caught in the traffic everyday? Well, there are many more people affected much worse than you. The daily commute in some of the world's most developed cities is longer and more gruelling than ever before, reflecting the failure of transportation infrastructure to keep pace with the booming economic activity, according to IBM's first global Commuter Pain study.

Cities like Beijing, Mexico City and Johannesburg top the global poll of the worst driving commutes in the world. According to the study, Beijing and Mexico City scored 99 each out of 100 in the commuter pain index to become the top two cities in the world having the worst traffic jams.

New Delhi also figures among the top 10. A good majority of people feel traffic has worsened in the last three years.

Strangely, the survey makes no mention of the famed Mumbai traffic jams.

They have complained that traffic snarls are affecting their work, health and well being, according to the IBM study of 8,192 motorists in 20 cities across the globe. The survey found 65 per cent people who drive to their offices are completely stressed and have little time for their family. About 29 per cent of the people surveyed said that traffic jams were adversely impacting their performance at work or school.

The congestion in many of today's developing cities is a relatively recent phenomenon, having paralleled the rapid economic growth of those cities during the past decade or two. By contrast, the traffic in places like New York, Los Angeles or London developed gradually over many decades, giving officials more time and resources to address the problem.

The two cities with the most painful commutes, according to the survey -- Beijing and Mexico City -- had bus transport rates of 44 per cent and 32 per cent, respectively -- raising the thought of how much worse traffic would have  been if so many people did not travel by bus, states the study.

Driving on downtown city streets was far more prevalent in Beijing (91 per cent). Interestingly, in substantial improvement, Beijing led the way 16 per cent. 31 per cent of respondents said that during the past three years traffic has been so bad that they turned around and went home.

The percentage in Beijing, however, is 69 per cent, the highest for the survey; and only 15 per cent in Berlin, representing the lowest, amongst the surveyed cities. The index comprised 10 issues that include commuting time, time stuck in traffic, stress, anger, traffic affecting work, traffic so bad driving stopped, and trips not taken because of traffic.

on the cities most affected by traffic jams... In Mexico, car-pooling edged out buses as the second most popular mode of  transportation. Here Madrid led the way with 29 per cent, followed by Stockholm  and Mexico City at 20 per cent.

When it comes to pain, perception is reality, and the commuters in this survey clearly felt that roadway traffic has become worse in the last three years. Almost 49 per cent people said it had become 'worse' and 18 per cent felt it had become a 'lot worse'.

Conversely, only 20 per cent of those surveyed said the situation had improved at all, and only 5 per cent said it had improved substantially. 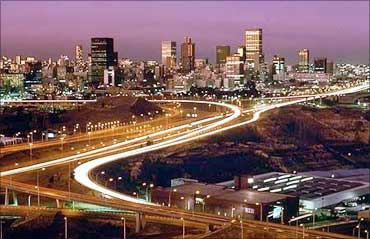 The only cities outside the United States with comparatively high driving levels were Stockholm (64 per cent), Toronto (70 per cent), Johannesburg (81 per cent), and Melbourne (91 per cent). The stop-start traffic was particularly pronounced in Johannesburg.

Around 87 per cent of the respondents have been stuck in roadway traffic in the last three years.  The average delay is one hour.

The 'best' cities are Melbourne, Stockholm and Buenos Aires, where 25 per cent or more say they have never been stuck in traffic.

Swedish capital Stockholm, with a low index score of 15, is the best city for commuters, while cities like Melbourne and Houston had also the most pain-free roadway traffic, found the survey. 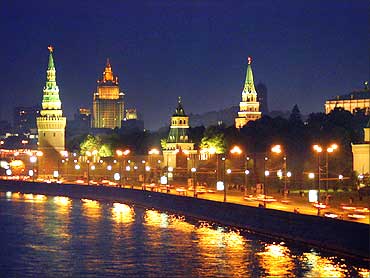 Moscow has the longest traffic jams, averaging 2.5 hours -- the world average is one hour. The unreliable driving time was significantly more the case in Moscow (57%) and Beijing (49%) than in other cities.

"Traditional solutions -- building more roads -- will not be enough to overcome the growth of traffic in these rapidly developing cities, so multiple solutions need to be deployed simultaneously to avoid a failure of the transportation networks," said Naveen Lamba, IBM's global industry lead for intelligent transportation.

"New techniques are required that empower transportation officials to better understand and proactively manage the flow of traffic," said Lamba. 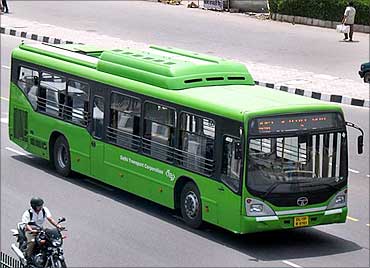 Though one of the worst-hit places, New Delhi has made a substantial improvement of 17 per cent over time. Even then it is the world's 5th worst place for commuters.

The survey found that if commuting time is reduced, 40 per cent of the people in New Delhi would work more, increasing productivity and efficiency.

The global average was 16 per cent. New Delhi also scores badly in terms of stop-start traffic. As for a reduction in travel stress, 36 per cent of the respondents said that improved public transportation would help. Beijing topped the list here (65 per cent), followed by Milan (57 per cent), New Delhi (53 per cent). 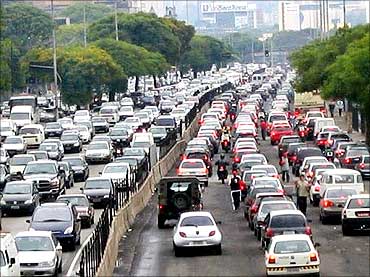 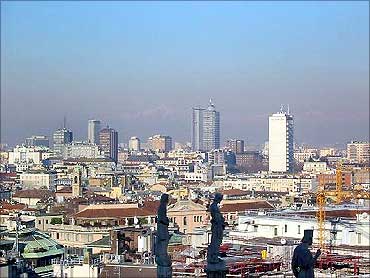 Although driving is by far the most common way in which Americans go to and from work, this is distinctly contrary to other parts of the world.

For instance, while over 90 per cent of the respondents in New York and Los Angeles reported driving to work, only 32 per cent did so in Paris, 34 per cent in Amsterdam and Buenos Aires, and 37 per cent in Milan.

When commuters cancelled a recent planned driving trip, the destination was work 24 per cent of the time, recreation 22 per cent, and shopping 21 per cent . Work-related cancellations were most pronounced in Buenos Aires (43 per cent), Mexico City (42 per cent), Stockholm (36 per cent), and Milan and Moscow (35 per cent).

As for a reduction in travel stress, 36 per cent of the respondents said that improved public transportation would help. Beijing topped the list here (65 per cent), followed by Milan (57 per cent) and New Delhi (53 per cent). 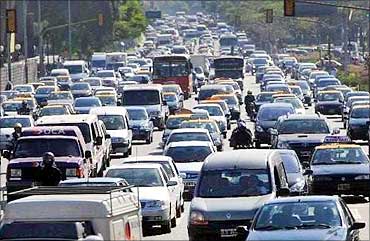 In Melbourne, Buenos Aires and Stockholm, 25 per cent or more commuters said they have never been stuck in traffic. Regarding the necessity of working in the office as opposed to home and the effect of the economic downturn on the way people go to work, the findings were in some ways surprising.

For instance, Moscow, New Delhi, and Sao Paolo -- again, ranked among the most painful commutes -- all recorded significant numbers of people who worked at home 2-5 days per week. As for the effect of the economic downturn, 23 per cent said it made them change their transportation ways; 77 per cent said it did not.

The greatest percentage saying it did change their ways were in Mexico City (60 per cent), New Delhi (50 per cent), and Buenos Aires (41 per cent) - suggesting that traffic alone, though bad, was not enough to make them switch their transportation modes. In Madrid, carpooling edged out the bus as the second most popular mode of transportation. Madrid led the way with 29 per cent, The survey found that only five per cent of Madrid commuters would work more if commuting time could be reduced. The global average was 16 per cent. 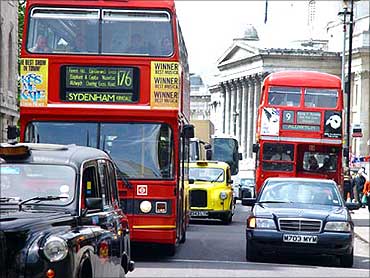 Among those interviewed 30 per cent of respondents reported increased stress from traffic; 27 per cent increased anger; 29 per cent reported that traffic has harmed their performance in work or school; and 38 per cent reported having cancelled a planned trip due to anticipated traffic.

We know the enormity of this problem - both in its objective and subjective dimensions. Traffic congestion does not just add stress to our already-stressful lives; it impedes economic development while increasing air pollution.

The study also highlighted how traffic problems have an adverse impact on commuters' health.

While 30 per cent of the total respondents reported increased stress from traffic, 27 per cent said there is an increase in anger and 29 per cent said traffic woes have harmed their performance in work or school.

"The congestion in many of today's developing cities is a relatively recent phenomenon, having parallelled the rapid economic growth of those cities during the past decade or two," said the report.

"We know the enormity of this problem -- both in its objective and subjective dimensions. Traffic congestion does not just add stress to our already-stressful lives; it impedes economic development while increasing air pollution," it said.

The survey also found that for about a quarter of the respondents, increase in gas prices would be factor to consider other forms of transportation to go to work.

But in cities like New Delhi, Moscow and Los Angeles, such feeling was relatively absent, perhaps suggesting that at least a modest rise in gas prices would not much affect traffic in those cities.

Stating that there won't be any reduction in number of cars on the roads in near future, the report also called for other steps, including taking help of advanced technology, to tackle the problem.