How skewed is data on India's poverty?

It would be a huge advance for India if poverty estimates moved to the family as a unit, says T N Ninan.

A contentious statement on Indian poverty, put out some years ago by Arjun Sengupta, said that 78 per cent of Indians lived on less than Rs 20 a day. That figure always looked problematic, but has become a favourite statistical weapon in the hands of the Left. So it is just as well that the Suresh Tendulkar report on poverty has effectively nailed that number. 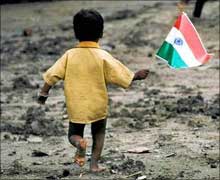 The Tendulkar report says that 25.7 per cent of urban residents are below the new definition of the poverty line, because they spend less than Rs 578.80 per month.

That is Rs 19/day, close to the Sengupta benchmark. Given the urban-rural mix of 28:72, if the Sengupta claim of 78 per cent for the country as a whole (urban and rural) is correct, then 92 per cent of all rural residents would have to be consuming less than Rs 20/day.

The visual evidence and statistical probability tell us that this is improbable, if not impossible. But it is a safe bet that the Sengupta number will not die, because it is too convenient a figure for the poverty industry to give up.

There is also the important point that these numbers are based on National Sample Surveys, which (as Surjit Bhalla has argued) report consumption levels that are much lower than what National Accounts tell us. If this bias were to be corrected for, even Prof Tendulkar may have overestimated the poverty level, which he says envelops 37 per cent of the country as a whole.

The longer-term issue is whether we can arrive at better ways of looking at poverty - and there has to be more than one. India has traditionally looked at food intake as the single yardstick; the Tendulkar report now looks at affordability with regard to a bigger basket of goods, which is the right way to go-but it does not go far enough.

So, measuring individual-level consumption can be misleading. Some countries go further, looking at age groups and other demographic patterns, but at the moment it would be a huge advance for India if poverty estimates moved to the family as a unit.

Then there is the question of absolute and relative poverty. The US looks at both absolute poverty (actual income) and relative poverty (income level in relation to the median, meaning the 50th person in a ranking of 100 individuals). The European Union too looks at relative poverty - defined as being income that is 60 per cent lower than the median. Strictly speaking, this is a measure of inequality, but it is an important measure when assessing patterns of growth.

India's inequality level is usually said to be low, certainly much lower than China's - but the comparison is incorrect because India looks at consumption equality while most countries look at income. As Pranab Bardhan demonstrated  in 'How unequal a country is India?', if you look at income inequality in both countries, India is now significantly more unequal than China. And when it comes to other inequalities (land holding, education, and opportunity in general), India is considerably worse off. Ditto with inter-generational movement.