The government should focus on smaller labour reforms; they may not be headline-grabbing but can collectively be effective, says Shyamal Majumdar. 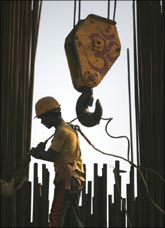 The decade that will get over in a few days saw spectacular inaction on the labour reforms front. There was, of course, no dearth of committees or expressions of 'honest' intentions, but the speed on the ground was slower than even a sloth.

Though everyone knows the problem by now, let's refresh our memories quickly.The crisscrossing network of chaotic and often contradictory laws (India has over 50 of them; we even have a Weekly Holidays Act, 1942) needs to be overhauled or scrapped, the most important being the Industrial Disputes Act that guides the hiring and firing rules in industry.

While laws all over the world have been amended to make life simpler for both employers and employees, India seems to have perfected the art of being in a reverse gear on this front. As it is, the Act, framed in 1947, made it very hard for firms to fire workers.

Through an amendment in 1985, the Act made firing even more difficult by a wider range of firms. According to the amendment, all firms employing more than 100 workers need to get permission from the state government before retrenching workers. The permission never came in practice.

Experts, including Kaushik Basu, then a professor of economics at Cornell University and now the chief economic advisor, have often argued that this law has probably done more to hold back the growth of India's manufacturing sector than any other policy.

Writing for BBC News (news.bbc.co.uk), Basu had argued that such laws leave no room for free contracting. Take, for example, a firm that wants to manufacture a product that has volatile demand -- like fashion garments. This firm may want to offer workers higher wages but may also want to make it clear to them that they can be given a month's notice and asked to leave.

Such a contract will have no legal standing because the Industrial Disputes Act specifies how and when workers may or may not be retrenched. Basu also said what is needed is not freedom for firms to wantonly fire workers but a legal regime whereby firms can write different kinds of contracts with their workers depending on their needs. One firm may offer a low wage and life-time guarantee of work and another a high wage and very short notice to quit.

At first sight, laws like the ID Act look like a kind piece of legislation that protects the jobs of poor workers. But what this popular view misses out on is the fact that this law also keeps thousands of workers unemployed because firms, wary of the fact that they will not be able to offload the workforce, do not hire in the first place.

That's precisely what has happened in India's employment market. India's largest temporary staffing firm Teamlease has estimated that while the country has roughly 400 million workers, the organised sector employment has remained static at 30 million for 30 years, of which 22 million are working in the public sector and a minuscule eight million in the private sector.

Will the next decade see any changes on this front? Unlikely, if one considers the track record of the decades that we have, or are, leaving behind. Let's consider the most recent example. The latest Parliament session could not even clear a simple labour law amendment Bill which would encourage small and medium enterprises to hire more workers and file their compliance reports electronically.

Called the Labour Laws (Exemption from Furnishing Returns and Maintaining Registers by Certain Establishments) Amendment and Miscellaneous Provisions Bill of 2005,the Bill was cleared by the Cabinet and listed for introduction in the Rajya Sabha as many as seven times.

While the original 1988 law allows small industries with up to 19 employees to use a single compliance form for nine laws, the labour ministry has been seeking to bring more firms under this to boost job-creation.

The amendment Bill increases the number of labour laws for which a single return can be filed to 16, and allows firms hiring up to 40 workers to use the simpler compliance regime.

But apparently, the Union labour minister chickened out at the last moment as he was not sure whether the government (which doesn't have the numbers in the Upper House) would get the support of the Left and the BJP members.

So, all of us will be kidding ourselves if we think the next decade will see any far-reaching changes in the inflexible labour law regime. Having said that, it may not be a bad idea to look at what Teamlease Chairman Manish Sabharwal says about low-hanging fruits -- smaller reforms that can collectively make a difference.

Thankfully, the government does not need to set up another committee for guidance in this regard. The roadmap has already been drawn up by the task force on employment opportunities, headed by Montek Singh Ahluwalia, as well as the report of the National Commission on Labour.

The first of these "smaller reforms" could be in the area of trade union registration. The Trade Union Act, 1926 allows any seven workers to form a union. This has led to multiplicity of unions and intense rivalry among splinter groups. If you don't have half a dozen unions, you have half a dozen groups within the unions, each vying for a place in the collective bargaining machinery of a factory, says an employer. The Act could be modified to state that at least 10 per cent of the workers in a company or 100 employees, whichever is less, are necessary to form and register a union.

The other crucial question is the recognition of trade unions. The government would do well to accept the recommendations of the National Commission on Labour, which suggested a check-off system (membership based on regular payment of subscription), with 66 per cent entitling the union to be accepted as the single negotiating agent.

If no union has 66 per cent support, then unions that have the support of more than 25 per cent should be given proportionate representation on the college. Recognition of unions, once granted, should be valid for a period of at least four years. No claim by any other trade union for recognition should be entertained in the intervening period.

Also, while it is nobody's case to take away the right to strike, the Act can be amended to introduce the system of "strike ballot", whereby a strike can be called only if it is supported by a qualifying majority of the workers. At present, any splinter group of a trade union can call a strike under the law.

The Montek Singh Ahluwalia Committee's recommendations on long-term contracts also need a closer look. The interpretation of the law to extend the retrenchment provisions even to cases of non-renewal of a fixed-term contract of employment doesn't make sense.

A system of short-term employment contracts can easily be introduced. In order to avoid legal challenge to this arrangement on the grounds of equal treatment with permanent labour doing the same job, provisions can be made for paying such labour a premium over normal wage, the Ahluwalia committee had said.

None of these are as headline-grabbing changes in the law as a hire-and-fire kind of policy initiatives, but are eminently sensible.