What the CII achieved in 25 years 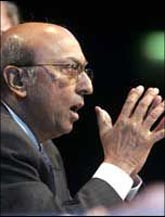 The first ten years of the Confederation of Indian Industry (CII) in Delhi - 1974-1984 - were traumatic. At the time, it was known as the Association of Indian Engineering Industry (AIEI), and it was struggle all the way, writes Tarun Das.

There was a hunger and thirst all around for new thought, new ideas and new initiatives impacting the industry, the economy and the country. It was into this vacuum that CII tried to position itself and the first agenda was to build trust and confidence through partnership and co-operation, not through confrontation and conflict.

This objective was achieved by Team CII consisting of office bearers and staff working very closely, with a missionary zeal, wanting to move India not only on the industrial front but also on the social, economic and international fronts.

This was the way it all began and it meant CII had to be a public service institution rather than a business lobby and to paint a much wider canvas than had happened hitherto with business associations and chambers in the country and, even, around the world.

The most critical issue facing CII in the 1980s was whether to continue in a protected economy, with industry making largely substandard products but earning good profitability and paying high taxes or evading taxes, or change the agenda of action and drive for opening the economy, competition and, concurrently, transforming quality and competitiveness.

There was much debate internally and many apprehensions that tariff cuts, doing away with import licensing and industry licensing could bring unknown dangers. All these bridges had to be crossed, and were crossed, inspite of internal differences. In 1986, CII started the National Quality movement at a time when people were extremely sceptical about the need for quality, and its concept. That bridge, too, was crossed. So, one of the first battles was won internally.

There was no looking back and, fortunately, confidence came in the years 1991-1996 when competition came with growth, higher profitability, larger markets and a "feel good" factor. Of course, the euphoria was shattered in 1997 with the South-East Asian financial crisis and the decline in growth.

But this led to another round of restructuring in the industry, emerging in 2003 as a far more globally competitive and confident industry. The confidence that had been given by the IT sector in the 1990s then spread to the manufacturing sector.

A second key agenda started with the Rio conference on sustainable development in 1992. Environment, energy efficiency and sustainable development were either unknown or completely alien words in the dictionary of business. The Rio conference changed all that. The CII delegation came back with a consciousness of the issues and the desire for action. But CII was strapped for financial resources.

Then the chairman of the most respected business group in India, Ratan Tata, committed offline that CII should start the Environment Management Division and his group would underwrite the costs for three years. Experts were recruited, technical staff appointed and trained. This pioneering initiative initially flowed like a weak stream of water. But, later, as a strong river.

A third issue which emerged in the late 1970s and early 1980s was the branding of Indian industry. The word "branding" was not known then. But what was known was that Indian products did not enjoy a reputation for quality and reliability, that action needed to come not through government legislation or mandates but through the industry's own internal initiatives.

The whole concept of trade fairs, to be much more than exhibitions, to project the quality and capability of the Indian industry, to bring foreign companies with their products and services for display and to connect Indian and foreign businessmen at the trade fair market place was an initiative started and consolidated with the Indian Engineering Trade Fair, later renamed the International Engineering and Technology Fair, the Auto Expo and other trade shows.

Today, an initiative started in 1975 and consolidated in the 1980s and 1990s has become a way of life in India as it has been in many parts of the world. This activity, combined with other initiatives for international networking, changed the way business and industry looked at itself and looked at the world outside. It led to branding Indian industry in a very positive manner. It also led to Indian companies gaining self confidence in dealing with the world and growth in trade and, later, to investments.

One of the limitations which was felt from 1974, when the headquarters were set up in Delhi for the first time, and up to 1990 - all of 16 years - was the fact that the organisation, by its name and constitution only covered the engineering Industry. It was a wide enough base but it was not all of industry.

In 1986, the name was changed from Association of Indian Engineering Industry (AIEI) to Confederation of Engineering Industry (CEI) to cover both individual companies and sectoral trade associations. The next leap took five years of heated internal debate and consultations and flowed from the advice of the then prime minister, Rajiv Gandhi, that this institution needed to service and cover all of industry to be more effective, to be more useful in national development and be more valued

It was not a change made easily. Five years of the resistors vs the liberalisers led to the latter finally winning the round in 1991 with the renaming to CII. It made a huge difference to the opportunities, the challenges and the growth of the organisation. The 1990s witnessed explosive growth of membership companies since the trust of Indian industry in CII had been built over years of service. This was a hugely significant milestone.

In recent years, there have been suggestions that there should be another change in name to include and go beyond industry. It now covers food and agriculture, infrastructure, etc but the movers of the idea that it should be renamed Confederation of Indian Economy or Confederation of Industry and Agriculture are still waiting.

These are some of the big issues of the last 25 years. There are many more. Wait for my book!!!

(The author stepped down as the Chief Mentor of the CII a few days ago)
Tarun Das
Related News: Team CII, International Engineering and Technology Fair, AIEI, India, Centre for Sustainable Development
Print this article