The gap between promise and achievement in JNNURM is enormous, writes Subir Roy.

The only positive change visible in Indian cities indicating that policy and action to meet the urban challenge are moving in the right direction is the significant number of shiny, new low-floor buses funded by the Jawaharlal Nehru National Urban Renewal Mission. 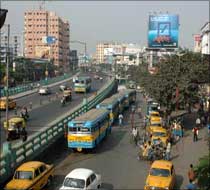 Somewhere along the way Delhi acquired a bus rapid transit system, amidst initial vociferous protests from the city's car owners, and Ahmedabad did the same without any protest because it was introduced on a lonely highway-like stretch which didn't affect many.

But there are also signs or premonitions of change which the middle class thinks are for the better but are not. Perhaps the most ubiquitous of them is the proliferation of flyovers and underpasses, sometimes funded under the mission. They come initially as a great deliverer but ultimately lead to more road congestion.

Perhaps more fearsome is the talk and occasional promise of signal-free stretches along important thoroughfares. "Signal-free" is a boon only for cars. The poor who go by bus or cycle or on foot are either unaffected or worse off. Crossing a signal-free road is a pedestrian's nightmare and you need an underpass or a foot bridge at a great cost at every earlier signal point to restore the status quo ante for the pedestrian.

The gap between promise and achievement in JNNURM is enormous. A senior official in charge calls it a "hit" and cites achievements like many states having reduced stamp duty (this is indeed a step forward) for property transfer to the targeted 5 per cent.

He also speaks of some states having formed unified transport authorities (certainly a good first step) and some others realising (action is still some way off) the virtues of levying user charges on water. Also promised is action on e-governance at the municipal level for better transparency and accountability.

The government's own website lists 23 heads of reform with target dates and current status (updated till June 2008!). Chennai is one of the leaders and Delhi the worst, having agreed to do nothing. As many as 28 states and Union Territories have got rid of the urban land ceiling legislation, but there is no change in the reality on the ground in two of the largest urban concentrations, Mumbai and Delhi. Around Budget time this year, with four out of the seven years of the mission gone, states were way behind in utilising the central funds which had been made available to them, and were even further behind in undertaking the promised reforms as the first tranche is released by simply promising to do so.

The reality is that the new buses will soon get battered and old, and the situation will go back to square one because the central funding for them was a once-for-all effort prompted by the need to give the country's automotive sector, reeling from the economic slowdown, the much-needed stimulus.

As things stand, critical reforms which were to be enabled by central funding of JNNURM, without which the urban challenge cannot be met, will largely remain a distant goal at the end of the mission. And it was the most comprehensive, well thought out policy attempt in the country's history to meet the urban challenge, a challenge which will not go away as rural migration to urban areas will continue and even speed up.

By 2020, that is barely a decade hence, India's urban population will increase by 100 million, that is, we will need additional facilities equivalent to seven Mumbais to simply remain, amenities wise, where we are!

Since JNNURM is destined to fail where it matters the most (taking reforms forward), and since without that the enabling governance cannot be put in place, here is a list of simple, achievable actions which will make a difference at the margin:

These are things that governments can do and may be more willing to do than what will really work - institute for every city (only a few have it now) a mayor in council type of set-up, and direct election of mayor.