Sure, there are 10 million new subscribers each month, but they're not adding much value -- telecom revenues are flat as a chapatti. There's also pretty serious doubt as to how many of these are new subscribers and how many just existing subscribers buying new SIM cards to avail of discounts/schemes on them. 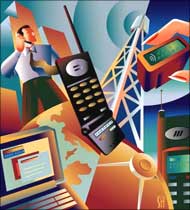 In the build-up to the Bharti-MTN deal, this was pretty much the story you kept hearing - average revenues per user are collapsing in India and will get worse as all telecom growth comes from rural India since urban India is 95 per cent penetrated already (24 mn rural subscribers were added in the June quarter as compared to 21 mn urban ones), so Bharti just needs to get out of India if it wants to grow.

MTN was the obvious solution given its pre-eminent status in a growing market like Africa and its ARPUs that are three times Bharti's.

All of this is obviously true in a sense, though judging by the stock market's reaction to the deal collapsing, not everyone bought Sunil Mittal's view that the deal was a game-changer for Bharti.

This column is not getting into whether the synergies the analysts have documented in elaborate spreadsheets would actually ever come about to make it worth the money Bharti would have invested, or issues like whether Bharti needs to look for other investment avenues.

Presumably it does since Mittal is a canny businessman and hasn't taken too many decisions that have hurt Bharti's growth. As for the state of the telecom sector, a lot depends on how you view it.

The trending down of revenues is a fact - the revenues in the March quarter (the Trai doesn't give total GSM revenues for June) suggest new subscribers are giving as little as Rs 70 per month to telcos.

But given that each telecom tower a company sets up can service a certain amount of traffic - whether from a lesser number of users calling more or from a higher number calling less is irrelevant - what's important is the profitability of the business. Admittedly Bharti is the best in class, but its numbers show a completely different side to the Indian telecom business - it shows a business that is giving returns in excess of 30 per cent on capital employed.

And in case you think that's just Bharti, just look at some recent telecom deals to see how potential investors are looking at the market. After Vodafone put in over $11 bn in cash to take over Hutch in a deal valued at $18.8 bn in 2006, Telekom Malaysia bought 15 per cent of Idea Cellular for $1.5 bn last year; Etisalat bought 45 per cent of the start-up Swan Telecom for $900 mn last year while Telenor paid a whopping $1.2 bn for 67 per cent of Unitech's start-up - firms with no subscribers were valued at, respectively, $2bn and $1.8bn, suggesting the market has a way to go; NTT DOCOMO bought 26 per cent of Tata Teleservices for $2.7 bn less than a year ago. 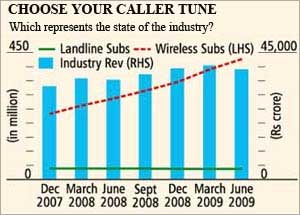 So where is this potential coming from? While the newcomers obviously cannot expect to match Bharti's economies of scale, the big game-changer is likely to be 3G.

To put the data services usage projections in perspective, Trai data show that while India had no broadband subscribers in 2003, this was up to 5.3 mn in 2008 and they had an ARPU more than three times that of the plain vanilla voice customers.

So, Bharti may want to buy MTN, or now Zain going by a report in this newspaper a few days ago, but it's not because India's telecom is in trouble.

Bharti-MTN failure all 'part of the game': Pranab

Bharti may take on MTN in bid for Zain