India's stake in the dollar's future

New Delhi can be neutral in the dollar-euro-yen dance, but it has a stake in a stable US currency, writes Sanjaya Baru.

It was happenstance that I landed in Washington DC on the 21st of September. In the week I was there, I would be reminded repeatedly of the significance of that date - the 78th anniversary of the pound sterling going off the Gold Standard. 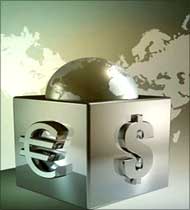 In discussions around town, on the geopolitical implications of the global economic slowdown, it was clear that those who worry about the future prospects of US power draw no comfort at all from the geopolitical consequences of the end of the Gold Standard.

It is neither Osama bin Laden nor Ahmadinejad, neither the Korean bomb nor the Taliban that worries Washington DC as much as the future of the US dollar.*

The defeat in Vietnam was met with remorse. America shifted gears and moved quickly to win the Cold War. The response to the 9/11 terror attack was one of anger. But the US has made new friends in the Muslim world in Indonesia and Turkey.

While nuclear proliferation remains a concern, the US is quite capable of managing a world with more nuclear powers. However, the trans-Atlantic financial crisis and the economic slowdown at home have made America nervous.

No problem worries the US as much as the prospect of a world going off the dollar.

"Make no mistake," said a senior Washington DC policy wonk, "the decline of Britain began the day it went off the Gold Standard." The end of the dollar's pre-eminence will not happen in quite so dramatic a manner, on a given day, nor is it still in sight, but the US is focused on that prospect.

It is, therefore, not surprising that World Bank President Robert Zoellick, a Vulcan (a strategic policy advisory group that greatly influenced former US President George Bush), chose to speak about the dollar's decline at the School of Advanced International Studies before taking a plane to Istanbul for the annual meetings of the IMF and the World Bank.

"The United States would be mistaken," he said, "to take for granted the dollar's place as the world's predominant reserve currency. Looking forward, there will increasingly be other options to the dollar."

Interestingly, his counterpart at the Fund, Dominic Strauss-Kahn, was more sanguine about the dollar. Was he calming nerves or just being blase? After all, few Europeans, apart from the British, would worry about the dollar as long as the euro gained traction. Incidentally, the British have been alarmed by anonymous US suggestions that a new currency quad be formed involving the dollar, the euro, the yen and the yuan!

However, it is neither the euro nor the yen that bothers Washington DC's strategic policy analysts as much as the yuan. For it is not just the global economic slowdown and the problem of global imbalances that make the bells toll for the dollar. The emergence of the Chinese yuan, especially in 'rising Asia', and the growing shift to the euro by some oil exporting countries are also shaping trends.

The yuan is on a roll in East and South-East Asia. A decade after the yuan made its presence felt by stepping in to help Asian countries in distress during the Asian financial crisis, it has consolidated its strategic position through the Chiang Mai Initiative Multilateralisation (CMIM).

At a recent conference at the Asian Development Bank in Manila, I was struck by the readiness of East and South-East Asian nations to accept a larger role for China's currency in the region. Many see the CMIM as a stepping stone to the Asian Monetary Fund, even though the Chinese themselves still choose to be circumspect about all this talk of their growing clout and repeatedly calm American nerves.

While China tries to be courteous to the West in making its global economic presence felt, America's detractors like Mahmoud Ahmadinejad of Iran and Hugo Chavez of Venezuela feel no such urge. Both have been urging petroleum exporting nations to switch from the US dollar to the euro. During his brief stopover visit to New Delhi a couple of years ago, Mr Ahmadinejad devoted a third of his two-hour meeting with Prime Minister Manmohan Singh to offering prayers, a third to a discussion of bilateral issues and a third to the denunciation of the dollar!

Where do India's interests lie in all this? Clearly, when the world moved from the British pound to the US dollar, India could afford to take a neutral stance. It didn't matter strategically, apart from the fact that a large part of our reserves were valued in pound sterling.

While India can afford to take a similarly neutral view about the dance between the dollar, the euro and the yen, we have a stake in a stable dollar, and a strong one vis-a-vis the yuan.

Along with the rest of the world, we also worry about the lack of transparency in the management of the yuan. Here the IMF managing director must be complimented for being bold enough to assert once again that the yuan remains under-valued, even though it has become fashionable among US economists on the East Coast to pooh-pooh its significance for Chinese competitiveness.

But our concerns would be beyond the issue of yuan's flexibility. They should be about the yuan's influence.

When Prime Minister Manmohan Singh and President Barrack Obama meet next month, they should talk about the dollar and India's strategic stake in the stability of the existing global financial system.