Industrial growth you can bank upon

Once you adjust the credit growth data for seasonality, it shows an upturn that corresponds with a similar trend in industrial production, says Renu Kohli. 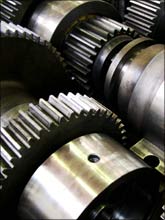 The drop in the growth of bank credit to less than half of what it was five years ago is worrying everyone -- both nominal and real credit growth are almost 4 per cent below the historical average for two decades. Its continued lethargic pace, amidst other signs of nascent resurgence, is also preventing the emergence of a firmer picture of economic revival.

But a closer look at the smoothed, high-frequency data reveals a turnaround in the situation: The three-month moving average of the seasonally adjusted month-on-month growth, which eliminates short-term volatility and gives a better grasp of changes in the direction of the economy, shows a sustained upturn in non-food credit for the last six months.

This upturn in credit growth corresponds closely to the similarly smoothed industrial output data for the same period.

These concurrent trends are of immense significance for they indicate that sequential momentum in manufacturing and credit offtake is gaining a toehold, pointing to an upturn in growth from as early as February 2009. Hopefully, these trends should accelerate in the coming months and the focus will shift to the pace of the recovery instead.

The upward trend in both credit and output growth is unmistakable (see chart). The three-month moving average (3mma) in non-food credit growth shows a steady ascendance from February 2009. In particular, annualised credit growth (3mma) was a strong 22 per cent in July.

For this fiscal (April-July), it averages 16 per cent on an annual basis. This, when compared to the average 5 per cent growth in the January-March quarter, the worst months, depicts a picture of vast improvement.

This trend coincides with the similarly smoothed industrial output series, which too is observed climbing steadily from the trough of February. The similarities are apparent -- annualised average growth in industrial production for this fiscal is 15 per cent against the 4 per cent averaged in the January-March quarter (3mma).

It also suggests that demand factors probably account more for the slow credit off-take, than risk aversion of the lenders, who've by now had ample opportunity -- at least, three quarters' performance since September 2008 -- to evaluate the extent of damage to their asset quality.

Going forward, these trends should gain traction as reinforced by some other features. For instance, the monthly momentum in seasonally-adjusted bank credit jumped from 0.7 per cent in May to above 2 per cent in June-July.

Anecdotal evidence from bankers confirms that loan sanctions are leading at this point and credit disbursals are expected to follow from September. And external commercial borrowings, which finance long-term investment, have been rising since April with an average $2 billion in June-July; cumulative overseas borrowings at $4.7 billion for this year, also compare favourably with the $6.5 billion of the corresponding period last year.

How much can bank credit growth be expected to accelerate in the near term? The upper bound could be provided by the actual monthly momentum in seasonally-adjusted, real non-food credit for April-July, with an assumption of constant monthly growth of 1.5 per cent for August-March.

For the post-reform period, a percentage point rise in GDP growth is associated with a 2 per cent increase in real credit growth, which is offset by an opposing influence of almost half this magnitude: A 1 per cent increase in the nominal interest rate leads to a decline of 0.9 per cent in credit growth. Using these elasticities (which are only indicativ), a 6 per cent real GDP growth for 2009-10 with constant borrowing costs, yields a baseline scenario of an average 12 per cent growth in non-food bank credit in real terms.

With a 4 per cent average inflation rate, bottom-line nominal credit growth could be around 16 per cent.

The spoiler here could be the unpleasant history. Comparing this downturn with the previous one in this decade (2000-01), the year-on-year real credit growth averages 7.6 per cent for both the downswings. What is worrisome is the recovery pattern: Credit growth recovered to only 8.1 percent in the following year (2001-02).

Could that pattern be repeated in 2009-10? It is hard to judge to what extent the past can be used as predictor here; if structural factors dominated cyclical ones in the recent growth period, 2003-07, as is widely believed to be the case, then history may not be of much help.

When we compare the two downswings along these dimensions, then the cyclical and trend components of GDP and real credit growth for this decade offers some insights, and also some puzzles.

Real credit and output growth both fell 0.4 per cent below respective trends in 2000-01; this time around, the fall in cyclical credit growth, 0.6 per cent below trend, is double the size of deviation of GDP (0.3 per cent) from its trend.

Does this reflect the severity of credit contraction in relation to economic activity? Or does the plunge represent the fall from the credit boom in previous years? Or is there a structural shift due to fundamental factors like financial deepening, rising incomes and a higher growth trajectory? At this point it is hard to tell these factors apart.

Finally, if credit growth remains range-bound within 16-21 per cent for the year, with acceleration to approximately 20 per cent (annualised) over August-October, is there cause for concern about crowding out?

Private sector's demand for credit at these levels should be comfortably funded by redirecting the excess liquidity currently prevalent in the economy. With most of the government borrowing to be completed by September, fears of crowding out in the near term may be a little exaggerated.

The author was, until recently, with the IMF.

India keeps its word, to give $10 billion to IMF