The RBI may be concerned about inflation but it is unlikely to put an abrupt end to monetary accommodation, says Abheek Barua.

The revival of the monsoon in north India over the last few weeks certainly seems to have cheered the stock markets. The assumption seems to be that while the damage to the summer crop is difficult to undo, delayed rain will help the winter or rabi crop. 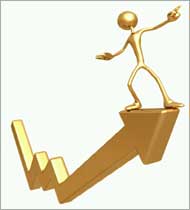 A consensus also seems to be emerging in the analyst community that while poor agricultural output might have a simple arithmetical impact on growth, the second-round effect on industry and services is likely to be fairly muted.

As a result, the impact on company profits could be much less than what initial predictions suggested.

International news has also been positive. US labour market data for August was better than expected for the fourth month in a row. Manufacturing indices both in Europe and the US have been fairly strong confirming that a recovery (even if temporary) is under way.

Risk appetite has improved as result - equity prices, for example, are up across a range of markets as are other high-yielding asset markets.

I am not entirely convinced that this will sustain. For one, there is a fairly large section of market analysts and academic economists who seem to believe that the industrialised economies are headed for another sharp dip in the business cycle.

Their argument is now well known - the current recovery is being driven by inventory restocking and stimulus that will peter out by the year-end. The structural changes that the US economy is going through (households rebuilding their balance sheets by pushing up their savings, for instance) restrain demand, not augment it.

The net result is likely to be another contraction in growth in the developed economies that will affect the emerging economies as well. If this happens, it could trigger a massive flight of capital from risky assets to the safety of US treasury bonds. The dollar could appreciate as a result and other currencies like the rupee could come under pressure.

The "double-dip" scenario is a contingency we must be prepared for from the policy perspective. Thus it would be foolhardy at this stage to extrapolate the future path of growth from current data, however encouraging they may seem.

The finance ministry has clearly decided to wait and watch before withdrawing some of the fiscal stimuli and that seems eminently sensible. The RBI may be extremely concerned about inflation but it is unlikely to put an end to monetary accommodation abruptly.

As I have argued before, the first round of monetary tightening is likely only in January. By that time we will hopefully have a better sense on where the global economy and the domestic economy are headed.

We must also prepare for a scenario in which the current recovery in the global economy and markets sustains and ramps up risk appetite further. Were that to happen, there is every chance that global capital will flood economies like India that are growing much faster than the rest of the world. This has implications both for the rupee and money supply and we perhaps need to think out a clear strategy to handle this.

For one, I think it is time we jettisoned the debate on whether the RBI should or should not intervene to prevent excess appreciation of the rupee. We cannot afford overvaluation of the currency.

While domestic markets might fetch us the base rate of 6-7 per cent, the ability to grow faster will depend on how effectively we can participate in the global recovery through exports of goods and services.

Unfortunately, every other economy in the world is likely to think on the same lines. Our success then will depend on how effectively we can prevent the rupee from appreciating against both our trading partners and our competitors.

This calls for both market intervention by the RBI and a longer-term strategy for the current account. One must remember that appreciation of the rupee is not just the result of strong capital flows. It is also the result of an inability to utilise these capital flows to feed growth.

If capital flows were to pick up and show signs of sustaining, it is imperative to run a larger current account deficit in the long term to avoid prolonged overvaluation. This in turn could be linked to the import needs of the sectors that are likely to lead the next phase of high growth - infrastructure, for instance.

In short, we must (at least analytically) link the need to step up project implementation in infrastructure with the objective of preventing excessive appreciation of the currency.

If the RBI does need to intervene more aggressively in the market, how does it deal with the monetary consequence? There are two "comforts" on this front. First, the government is likely to be a fairly large bond issuer in the medium term given the size of the fiscal deficit.

This would lead to automatic "sterilisation". Second, the recent financial crisis has shown that the monetary stabilisation scheme (MSS) has worked rather well. The stock of sequestered liquidity built up during the phase of excess capital flows has come in handy in dealing with both the liquidity crisis that came in the wake of the Lehman collapse as well in funding some of the fiscal stimulus.

The benefits of sterilisation and the use of MSS bonds certainly outweigh the static accounting "quasi-fiscal" costs of sterilised intervention. If capital flows become difficult to handle we should not hesitate to issue another large tranche of bonds designed to suck out liquidity.

Both the prospects of sustained recovery and downturn are equally challenging for policymakers. The right formula might be to stick to what has worked best in the past and let prudence, not dogma, guide policy.