News
Business
Movies
Sports
Cricket
Get Ahead
Money Tips
Shopping
Sign in  |  Create a Rediffmail account
Rediff.com  » Business » How green are the shoots?

How green are the shoots? 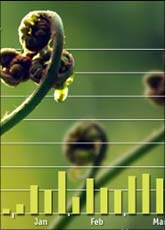 In a television interview in March 2009, Ben Bernanke, chairman, The Federal Reserve, the central bank in the US, said that he could see the 'green shoots' of recovery. Since then, the term has been widely used -- initially, to refute the possibility of a turnaround, and now, to question full-fledged recovery.

With 'green shoots' more visible now, the question of getting back to pre-crisis growth levels remains unanswered. We discuss some of the challenges the world economy is facing today, and where does India stand amid those.

The International Monetary Fund, in its July 8 update on the world's economic outlook, has pointed towards sluggish recovery.

For the US, which is at the epicentre of the current financial crisis, IMF expects output contraction of 2.8 per cent in 2009, followed by a modest upturn of 0.8 per cent in 2010. Although real estate prices in the US have stabilised as reflected by the Case-Shiller Index, consumer confidence continues to remain low and unemployment continues to rise.

"We expect non-farm employment to drop by 306,000 jobs with the unemployment rate reaching 9.6 per cent in August," says a report published by Wells Fargo Securities, a US-based financial services firm. This trend is expected to continue till early next year. A total of 6.7 million jobs have been lost in the US till July and these jobs may not come back in a hurry.

In fact, some may never come back. So, if the demand remains sluggish, it is unlikely that output will grow at the desired pace. The story, by and large, is the same in most of the developed world -- with some deviation arising due to the difference in the structure of the economy.

Though the global crisis has shaved off about 3 percentage points from the growth figure, at about 6 per cent India continues to remain one of the fastest growing economies in the world. The Indian economy expanded by 6.1 per cent in the first quarter of the current financial year compared to 5.8 per cent in the preceding quarter.

Higher growth may signal that the worst is behind us, but some downside risks could still surface in the coming quarters.

Apart from global factors, poor monsoon is a concern, though the effect is expected to remain muted. High food prices and building inflationary expectation due to poor harvest could be real threats.

Says Sunil Sinha, head and senior economist, Crisil, "The central bank may have to raise rates to curb inflationary expectation even before the effect of lower rates can transmit in the real economy." The reversal of interest rates will certainly spoil the growth expectation in the economy.

Fall in global output got arrested largely due to unprecedented intervention by the governments and the central banks. But, at some point, the government will have to get out of the market. For example, the US government may find it difficult to run the over-trillion-dollar deficit for too long.

Similarly, the unprecedented amount of liquidity pumped in by central banks will also have to be withdrawn, or else, money will find ways to assets like commodities, which can result in sudden and sharp upswing in inflation.

So, the biggest challenge for central banks will be to unwind liquidity without hurting growth. But there are no perceptions and no roadmaps for central banks to deal with this kind of situation. As you would realise, like "green shoots", "unprecedented" also gets used too often these days.