Only 123 corrupt officials in India? 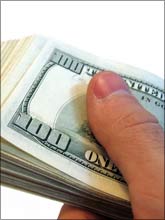 Transparency International, the Berlin-based organisation, ranks India as one of the more corrupt countries in the world--a conclusion based on surveys of business people.

You wouldn't think that is the case, if you go by what the Central Vigilance Commission is doing. In its latest report, the CVC has put on its website a list of 123 government officials against whom it has advised either penalties or prosecution for corruption.

Just 123 officials are corrupt -- in a country that ranks among the more corrupt economies in the world?

One explanation is that this is the list for just July; if you add the list for previous months, the number becomes less laughable. Major penalties, for instance, have been imposed on 385 officers during the year and the CVC has advised that this be done to 778 officials.

But even so, the numbers don't square with the reality that everyone is familiar with.

Even more worrying, in some ways, is that the CVC doesn't seem to be zeroing in on anyone other than the strictly small fry.

Look at the list for the latest months and as much becomes obvious. One of those on the list is a clerk in the railways and the major penalty proposed is to hold back one increment of his for a year -- that is, he will continue to draw a salary that is a little lower than that of his colleagues for the rest of his working days.

In another case, the pension of a gent is to be cut by 10 per cent. Are we saying the vanguard of India's corrupt hordes comprises junior functionaries who have committed transgressions that require such small penalties?

Take telecom, a sector where thousands of crores (billions) of rupees have gone into private pockets because of arbitrary decisions taken by those in authority. So, who are the people against whom the CVC has moved in the telecom sector, as revealed in the latest report?

A linesman, a dealing assistant and the like. Whether you choose to honour these worthies, or prosecute them in the manner the CVC thinks fit, it does appear that the list has what is at best a passing familiarity with what goes on in the sector.

One assumes that the CVC is staffed with well-meaning individuals who are doing their best to curb corruption and bring corrupt officials to book.

Yet it is clear that the country cannot expect the CVC (headed by a Constitutionally protected chief) to play any meaningful role in addressing the corruption problem. Can the same be said about the different Lok Ayuktas that are being set up at the Centre and in the states?

Indeed, is there a concerted effort to address the issue in all its manifestations, rather than look for paper solutions? For instance, can meaningless regulations and licences be removed (the Administrative Reforms Commission has suggested some) to reduce the scope for corruption?

Can the transparency of government functioning be increased by using information technology and the Internet, as the environment minister has done by posting on his ministry's website the status of all projects awaiting environmental clearance (which is known to have been a source of a great deal of corruption)?

What about meaningful audit of the means by which members of Parliament have acquired the wealth that they report when they file their nominations as candidates?

For instance, does the wealth square with their known sources of income? What about a systemic solution for the Dinakaran kind of case, when it comes to judicial appointments?

Without such questions being asked and answered, it's futile for the CVC to focus on a farcical nabbing of the small fry.

I am grateful to the people of India, says PM