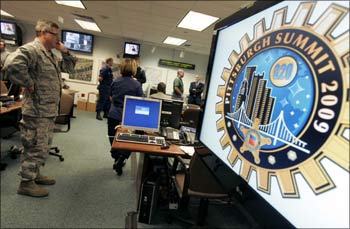 With just three meetings, the Group of 20 countries that accounts for 85 per cent of world GDP and two-thirds of the global population has emerged as the main forum for discussing international economic issues.

Born out of the crisis of the Great Recession, the G-20 is less than a year old but has managed to dispel the initial scepticism about what it might achieve, and notched up some important successes, including some at last week's Pittsburgh summit.

Since every crisis is an opportunity that should not be wasted, it is entirely to the good that the Great Recession has been used to push aside the increasingly inadequate G-8, and to replace it with the G-20. A look at the results of the latest meeting will make this clear.

For starters, there is the key announcement that the leading economies of the word will not implement exit policies for their stimulus packages before the global economy has properly recovered, probably at this time next year.

Even more important, the G-20 has agreed on a re-balancing of the global economy, which is the way to address some of the global imbalances that caused the financial crisis that in turn led to the Great Recession.

In practice, this means that China will encourage a more consumption-driven growth model as a way to address its export surpluses and ultra-high savings rates, and the United States will do the opposite -- encourage a more savings-driven model so as to tackle its long-running problem of deficits on both the budget and trade.

It is hard to conceive of any other forum in which such basic decisions, long argued about, could have been taken, and indeed taken without a dust-up of any kind.

What makes this even more remarkable is that all the major economies have agreed to supervision by the International Monetary Fund (IMF) to realise these goals.

That is not all. The G-20 has also agreed to re-weight voting power on the boards of both the IMF and the World Bank, increasing the voting percentage of the emerging economies by at least 5 per cent in the first and at least 3 per cent in the second, with the changes to be ushered in over the next couple of years.

Both organisations are also to be given vast sums of new money, so that they can be more effective in carrying out their charters.

These are not earth-shaking changes, but they are important steps and underline the growing recognition that there are more than a handful of important players on the world economic stage, and international bodies therefore have to become more representative if they are to carry any credibility.

The other achievement of the G-20 is the creation at the last summit of the Financial Stability Board to coordinate and monitor the strengthening of financial regulation.

This does not mean of course that the G-20 is the ultimate arbiter on all global issues; among other things, it plays no role at all in security matters.

India would have been reminded somewhat rudely of this even before the Pittsburgh meeting got under way, when the UN Security Council unanimously called on all countries last week to sign the Nuclear Non-Proliferation Treaty.