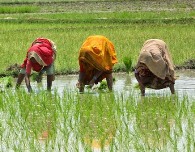 The vulnerability of Indian agriculture to climate change is well acknowledged. But what is not fully appreciated is the impact this will have on rain-fed (non-irrigated) agriculture, practiced mostly by small and marginal farmers who will suffer the most.

The crops that may be hit include pulses and oilseeds, among others. These are already in short supply and are consequently high-priced.

The available records indicated that the predominantly rain-fed tracts experience three to four droughts every 10 years. Of these, two to three droughts are generally of moderate intensity and one is severe.

Most of the rain-fed lands, moreover, are in arid and semi-arid zones where annual rainfall is meagre and prolonged dry spells are quite usual even during the monsoon season.

This makes crop cultivation highly risk-prone. If the quantum of rainfall in these areas drops further or its pattern undergoes any distinct, albeit unforeseeable, change in the coming years, which seems quite likely in view of climate change, crop productivity may dwindle further, adding to the woes of rain-fed farmers.

According to A K Singh, deputy director-general (natural resource management) of the Indian Council of Agricultural Research (ICAR), medium-term climate change predictions have projected the likely reduction in crop yields due to climate change at between 4.5 and 9 per cent by 2039.

The long run predictions paint a scarier picture with the crop yields anticipated to fall by 25 per or more by 2099. This will have a detrimental effect on farmers' income and purchasing power, with obvious down-the-line repercussions.

Though the rainfall records available with the India Meteorological Department (IMD) do not indicate any perceptible trend of change in overall annual monsoon rainfall in the country, noticeable changes have been observed within certain distinct regions.

At least three meteorological sub-divisions - Jharkhand, Chhattisgarh and Kerala - have shown significant decrease in seasonal rainfall though some others have recorded an uptrend in precipitation as well. Since rain-fed crops, like coarse grains, pulses and oilseeds are grown mostly during the kharif season, these are impacted by both low as well as excess rainfall.

The groundnut crop in the Rayalaseema area of Andhra Pradesh in 2008 can be a case in point. It suffered substantial damage because of high as well as low rainfall at different stages of crop growth. While heavy rainfall early in the season adversely affected the development of pegs (which bear groundnut pods below the soil), the relatively drier spell at the later stage hit the development of pods.

The most noticeable of such events in recent years included the country-wide drought in 2002, the heat wave in Andhra Pradesh in May 2003, extremely cold winters in 2002 and 2003, and prolonged dry spell in July 2004 and January 2005 in the north, unusual floods in the Rajasthan desert in 2005, drought in the north-east in 2006, abnormal temperature in January and February in 2007, and 23 per cent rainfall deficiency in the 2009 monsoon season. All these events took a heavy toll on crop output.

Indeed, the silver-lining in this dismal scenario is the National Action Plan on Climate Change, launched in 2008, which aims at developing technologies to help rain-fed agriculture adapt to the changing climate patterns.

At least four of the eight 'national missions' started under this programme will have direct or indirect bearing on rain-fed farming. These are the missions on sustainable agriculture, water, green India and strategic knowledge.

The ICAR-led national agricultural research system is also conducting research on specific projects under the umbrella programme on climate change.

"Apart from the use of technological advances to combat climate change, there has to be sound policy framework and strong political will to achieve this objective", maintains Singh.

State agricultural universities and regional farm research centres, too, will have to play a role in developing local situation-specific strategies for adapting the rain-fed farming to emerging climate patterns.