How to cope with Naxals: Plan panel's 7-point strategy

Working for the adivasis' well-being through means that secure their rights, honour their dignity and build a shared prosperity will make the Maoists irrelevant, says Rajni Bakshi. 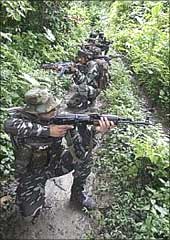 A few weeks before he was compelled to leave his home in Dantewada, Gandhian activist Himanshu Kumar came to Mumbai to address a public meeting co-hosted by the Bombay Chamber of Commerce, Citizens for Peace, Gateway House and Tata Institute of Social Sciences.

Those who heard Himanshu in November are not surprised by the ambush in which 76 CRPF jawans were killed last Tuesday.

While making it clear that he holds no brief for the Maoist forces, Himanshu had explained why they have a tactical advantage in an armed confrontation with the government.

One, the misery and rage of dispossessed adivasis has given the Maoists a cadre that is both passionate and determined. Two, the adivasis' intricate knowledge of the terrain will enable the Maoists to engage in a prolonged guerrilla warfare in which the State's security forces will remain at a disadvantage.

"You want peace because you want your life to continue uninterrupted," Himanshu told the gathering of business people and professionals who have most of what we need in life and then more. "They, the adivasis, want justice."

Instead of delivering justice the government's anti-Maoist efforts have not only further alienated adivasis, they have also uprooted activists like Himanshu who work through non-violent methods within the democratic framework.

Himanshu's Vanvasi Chetna Ashram at Dantewada was demolished by the local administration last year, apparently because of his opposition to the State-sponsored vigilante force known as Salwa Judum. Himanshu is now believed to be on the hit list of both the Salwa Judum and the Maoists.

Such voices seem to have faded into the background following the tragic loss of life in the attack last week. Much of the media debate is now focussed on tactical details of what is being called a 'war' but is in fact a civil war. It is possible that public opinion may even have tilted in favour of those who are pushing for an all-out military assault, possibly including air-strikes on the adivasi population.

At this juncture it has become imperative to look deeper than the anecdotal accounts of human rights activists and counter-claims made by those who are either rolling out or supporting Operation Green Hunt. If we look at some of the detailed analyses on this matter within government, then what is unfolding in the name of this operation begins to look even more bizarre.

Let us consider the findings of an expert group, appointed by the Planning Commission, whose report titled 'Development Challenges in Extremist Affected Areas' was delivered in 2008. This group, which included several senior bureaucrats, scholars and social activists, was asked to examine the causes for the discontent among the people that has led to the rise and spread of the Naxalite/Maoist violence.

'While not condoning the radical violence,' said the 79-page report, 'an honest response to it must begin by ameliorating the structural violence in the society.'

The group started by noting that the majority of Scheduled Tribes live in conditions of serious deprivation and poverty -- largely because there has been a steady erosion of traditional tribal rights and their command over natural resources. These conditions have been further aggravated by land alienation and forced evictions which often involve violence by the State functionaries.

In addition, says the report: 'The Naxalite movement itself brings further police repression on the poor as a matter of State policy. Any agitation supported or encouraged by the Naxalites is brutally suppressed without regard to the justice of its demands. In such matters, it becomes more vital in the eyes of the administration to prevent the strengthening or growth of Naxalite influence than to answer the just aspiration. . . . the method chosen by the government to deal with the Naxalite phenomenon has increased the people's distrust of the police and consequent unrest.'

So where do we go from here?

Here are a few points, from a long list of 'must do' recommendations made by Planning Commission's expert group:

In order to do all of the above, the report said in conclusion, the government must withdraw support to Salwa Judum and immediately stop herding adivasis into make-shift camps with dismal living conditions. This is not a viable strategy to counter the influence of Maoists.

Instead an empowered task force, consisting of responsive officials, should execute all protection and development programmes for the benefit of adivasis and also redress their grievances.

These conclusions and insights are not 'new'. Yet it is vital that more people study and highlight the work of this report, which can be found at http://planningcommission.nic.in/reports/publications/rep_dce.pdf

This report can enable a wide range of people to constructively challenge the prime minister and home minister, on their present course of action, without fear of being seen to be 'soft' on the Maoists.

Those who believe in 'inclusive growth' -- and seek to build a 'conscious capitalism' and a more responsible market culture -- must actively intervene to remove this tragic gap between the wisdom that is at the disposal of the government and what it is actually doing on the ground.

Diverse segments of society can work together towards solutions that bring both peace and justice. This was the premise of the public platform on which Himanshu spoke in Mumbai. Thus the meeting was called 'Insurgency, Counter-Insurgency and the Challenges of Building a Shared Prosperity'. (For details see: http://citizensforpeace.in/ )

Defeating the Maoists militarily will not in itself secure the future for either the adivasis or us city-dwellers. But working for the adivasis' well-being through means that secure their rights, honour their dignity and build a shared prosperity will make the Maoists irrelevant.

Infra investment in 11th Plan to be $500 bn:Montek