Rajeev Srinivasan considers the legacy of the man who popularised strategic intent and the Bottom of the Pyramid.

If you have any memories of the management guru, or opinion about how his management principles changed business perception, please share them with our readers. Write to us at bizdesk2003@rediffmail.com. 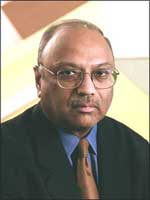 The term 'guru' is casually tossed around to denote anyone who has managed to jump on the bandwagon of some idea as it became popular. But there are some genuine thought-leaders in the business world who have created truly earth-shaking ideas; C K Prahalad of the University of Michigan, who passed away this week at the age of 69, was a giant of that kind.

Prahalad was responsible for propagating not one, but at least three outstanding ideas. In addition, as an extraordinary speaker and communicator, he influenced thousands of students and hundreds of companies with his vision and perspectives. Along with the late Sumantra Ghoshal and a few others, Prahalad was part of a phalanx of Indian-origin stalwarts making waves in business schools in the West.

As a professor of strategy, Prahalad was perhaps peerless; he teamed up with Gary Hamel to come up with the seminal idea of the "core competence of the corporation" in a famous Harvard Business Review article from the 1980s.

According to Prahalad and Hamel, "stick to the knitting" made a great deal of sense  they suggested that a company figure out its true strength (an almost Shakespearean "to thine own self be true"), focus on building up its ability to become impregnable in that area, and then produce a slew of products all based on this core competence.

Furthermore, they felt that creating competing strategic business units would lead to unhealthy competition and the hoarding of resources within the units, whereas it would be more optimal for all human resources were to be available wherever in the firm's far-flung operations they could be most useful.

The duo followed this up with the even more stunning paper on "strategic intent"  a true HBR classic. Impressed by the then seemingly-unstoppable Japanese invasion of the automobile sector and the electronics sector, Prahalad and Hamel argued that unlike short-term-focused Americans, Japanese planned a long-term strategy based on an intent that was clear, easily articulated, and around which all its activities could revolve.

This research led to a resource-based perspective of a firm's strategic direction, which nicely complemented the incumbent theory of competitive advantage as articulated by Harvard's Michael Porter. Porter's theory held that a firm's competitive strategy was determined by external, market issues: the bargaining power of suppliers and customers, the threat of new entrants and substitutes, etc.

Prahalad and Hamel articulated the resource-based perspective of how a firm could pursue its long-term by incrementally improving its capabilities. They used examples such as Canon (core competence in optics) and Sony (in miniaturisation and packaging) which used them to expand into adjacent markets - such as laser printers and video recorders respectively.

Thus, by deciding a priori on where they would invest their resources, and by working towards ambitious stretch goals (for instance earth-moving equipment maker Komatsu had the singular goal to "Beat Caterpillar", its entrenched and much bigger competitor), Japanese firms outsmarted their American rivals who were more focused on short-term goals related to stock price and thence executive compensation.

Intriguingly, the idea of intent can be applied to nations too: those that have strategic intent do well, those that do not flounder about with no direction. The contrast between the performance of China and India can be explained by their respective strategic intents (China intends to be number one, India lamely wants to be an also-ran).

This body of work would have been enough for Prahalad to be considered a serious thinker, be lionised and become a favorite on the lecture circuit, as usually happens with the one-trick ponies in the business hall of fame of the moment.

But Prahalad was not content, and his next idea was even more compelling. And timely, just as poor nations were metamorphosing from 'less developed countries' to 'emerging'.

Prahalad's insight was into the nature of poor societies. He may not have invented the concept of the purchasing power of the masses - quite possibly development economists had recognised it already - but it was certainly he who popularised the idea of the Bottom of the Pyramid, in eponymous books and essays.

The idea is that even though individual consumers in poorer countries may not be able to afford much by way of discretionary spending, in aggregate they do form a tempting market. Therefore, if you were able to create products that made sense to them, packaged in ways that they could afford, you might open up a whole new class of consumers.

It turns out that many of the world's potential consumers - and certainly India's - fall into this category. And firms which succeeded in reaching out to them have demonstrated that these are viable customers.

Examples include Nirma in detergents, and others who have created tiny one-rupee sachets of health-and-beauty products, which would fall into the discretionary spending power of even relatively poor people.

Prahalad was the prime mover behind the idea that large firms including multinational companies could profitably target these customers: a version of "doing well by doing good". There has been criticism in some circles who maintained that Prahalad over-estimated the profits that could be made; others suggested that there was something unethical about the very idea of, as it were, exploiting the poor.

The fact remains, though, that the poor pay disproportionately more for what they consume. Almost everywhere in the US, the cost of gasoline in poorer neighborhoods is higher than in tonier ones. Grocery stores charge more and carry less healthy merchandise - there are few fresh fruits and vegetables, and lots of high-fat, high-fructose-corn-syrup-laden processed foods.

Even under micro-finance programs, the poor in India pay much higher rates of interest than their wealthier peers. Some of this is justified by enumerating the high costs of default, crime, pilferage, etc.

In his most recent work, Prahalad combined elements of the BoP idea with work on innovation. With 'the innovation sandbox', he showed how imposing constraints often engenders creativity of the first order.

For instance, there are the success stories of Aravind Eye Clinic, Narayana Hrudayala and the Jaipur Foot, all of which offer uncompromising world-class services and products at a fraction of the prevailing cost, through astonishing process and product improvements.

This is the true inspiration behind what has come to be known as 'frugal engineering'. In its April 15th survey on innovation in emerging markets, the Economist magazine talks about signal successes such as the Tata Nano, the low-cost electrocardiograph made by General Electric in India, and other products that are changing the rules of the game, cutting costs by as much as 90 per cent.

These products represent 'innovation blowback' that will discomfit established western corporations that have not paid sufficient attention to the challenges and rewards of dealing with BoP customers.

Thus, after a lifetime of advising multinationals, Prahalad heeded the call of his roots in India. Companies have been paying attention to the needs of India's customers, taking his advice to heart - for instance, the Tata Group with its successful Ginger brand of moderately-priced business hotels; some multinationals, notably Cisco, are even setting up their innovation operations in India.

It is tragic that at a point when his blueprint of India in 2020 - his essay on India@75 - is almost within grasp, CK Prahalad has moved on to the ages. His vision was that India could take advantage of its demographic dividend, but only if it created 500 million skilled and trained people, he declared at his pan-IIT keynote a few years ago.

He believed in an India that could provide spiritual and not merely technical leadership. That vision - so close to that of giants like Sri Aurobindo - is something that Indian firms need to keep firmly in mind as they develop their strategic intent.

'Prahalad truly believed India will become a leader of the world'