News
Business
Movies
Sports
Cricket
Get Ahead
Money Tips
Shopping
Sign in  |  Create a Rediffmail account
Rediff.com  » Business » Why Greece will default on its debt

Why Greece will default on its debt

To not default, Greece's current deficit of 14% of GDP will have to fall to 5% which is unlikely, says Martin Feldstein. 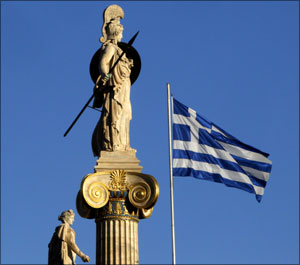 Greece's default on its national debt need not mean an explicit refusal to make principal and interest payments when they come due.

More likely would be an IMF-organised restructuring of the existing debt, swapping new bonds with lower principal and interest for existing bonds. Or, it could be a 'soft default' in which Greece unilaterally services its existing debt with new debt rather than paying in cash.

But, whatever form the default takes, the current owners of Greek debt will get less than the full amount that they are now owed.

The only way that Greece could avoid a default would be by cutting its future annual budget deficits to a level that foreign and domestic investors would be willing to finance on a voluntary basis. At a minimum, that would mean reducing the deficit to a level that stops the rise in the debt-to-GDP ratio.

To achieve that, the current deficit of 14 per cent of GDP would have to fall to 5 per cent of GDP or less. But to bring the debt-to-GDP ratio to the 60 per cent level prescribed by the Maastricht Treaty would require reducing the annual budget deficit to just 3 per cent of GDP -- the goal that the eurozone's finance ministers have said Greece must achieve by 2012.

Reducing the budget deficit by 10 per cent of GDP would mean an enormous cut in government spending, or a dramatic rise in tax revenue -- or, more likely, both. Quite apart from the political difficulty of achieving this would be the very serious adverse effect on aggregate domestic demand and, therefore, on production and employment.

Greece's unemployment rate is already 10 per cent, and its GDP is already expected to fall at an annual rate of more than 4 per cent, pushing joblessness even higher.

Depressing economic activity further through higher taxes and reduced government spending would cause offsetting reductions in tax revenue and offsetting increases in transfer payments to the unemployed.

So, every planned euro of deficit reduction delivers less than a euro of actual deficit reduction. That means that planned tax increases and cuts in basic government spending would have to be even larger than 10 per cent of GDP in order to achieve a 3 per cent-of-GDP budget deficit.

There simply is no way around the arithmetic implied by the scale of deficit reduction and the accompanying economic decline: Greece's default on its debt is inevitable.

Greece might have been able to avoid that outcome if it were not in the eurozone. If Greece still had its own currency, the authorities could devalue it while tightening fiscal policy. A devalued currency would increase exports and cause Greek households and firms to substitute domestic products for imported goods.

The increased demand for Greek goods and services would raise Greece's GDP, increasing tax revenue and reducing transfer payments. In short, fiscal consolidation would be both easier and less painful if Greece had its own monetary policy.

Greece's membership in the eurozone was also a principal cause of its current large budget deficit. Because Greece has not had its own currency for more than a decade now, there has been no market signal to warn Greece that its debt was growing unacceptably large.

If Greece had remained outside the eurozone and retained the drachma, the large increased supply of Greek bonds would cause the drachma to decline and the interest rate on the bonds to rise. But, because Greek euro bonds were regarded as a close substitute for other countries' euro bonds, the interest rate on Greek bonds did not rise as Greece increased its borrowing -- until the market began to fear a possible default.

The substantial surge in the interest rate on Greek bonds relative to German bonds in the past few weeks shows that the market now regards such a default as increasingly likely.

The combination of credits from the other eurozone countries and lending by the IMF may provide enough liquidity to stave off default for a while. In exchange for this liquidity support, Greece will be forced to accept painful fiscal tightening and falling GDP.

In the end, Greece, the eurozone's other members, and Greece's creditors will have to accept that the country is insolvent and cannot service its existing debt. At that point, Greece will default.

The author is a professor of economics at Harvard, was chairman of President Ronald Reagan's Council of Economic Advisors and president of the National Bureau for Economic Research © Project Syndicate, 2010.

Image: The Greek national flag flutters in the air next to a statue of Athena in Athens. Photograph: Yiorgos Karahalis/Reuters