FM needs a miracle to save banks

Every time the problem of capital crunch crops up, our policy-makers try to wish it away, says Ajit Ranade. 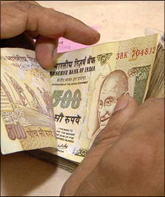 The biggest gathering of bankers in the country called BANCON is an annual occasion for review, introspection and future-gazing. Hosted jointly by the Indian Banks Association and a member bank by rotation, this year's venue was Mumbai and the joint host was the country's largest bank, State Bank of India (SBI).

The theme of the conference was 'The New Normal', a phrase that has gained currency rather quickly, even faster than 'green shoots'.

In the aftermath of one of the worst financial crisis on Wall Street, variously attributed to reckless lenders, assetless borrowers, clueless regulators, careless rating agencies and perhaps luckless taxpayers, there is an overwhelming feeling that there's no going back.

The go-go days of cowboy banking are over and new, acceptable standards of behaviour are the 'new normal'. This new normal has several ingredients like restrictions on leverage and on product 'innovation', greater disclosure and more oversight. But most of all it will mean lower profit margins for banks.

Never mind the inconvenient fact that Wall Street is currently reporting fat bonuses and fatter profits for top banks, even after massive bailouts. That incongruous story is a topic for another day.

But in Mumbai, the mood of the 'New Normal' was certainly cautious, if not somber. Optimism about India's growth prospects was mixed with an anxiety about what lies ahead for Indian banking.

The immediate worry is an increase in bad debts across sectors, especially small and medium enterprises, a rise in policy rates as well as cash reserve ratio and a still anaemic credit growth.

Credit offtake is rising at half its rate from a year ago, and one-third from its peak speed of 35 per cent, attained during the high growth phase of the economy. These are concerns of a short term nature. But the much bigger and longer term worry is that of capital.

As the economy picks up growth momentum, about which there is ample evidence, credit demand is bound to pick up. We should see a sustained phase of 8 per cent growth supported mostly by structural factors like demography and a high savings rate. Even if credit grows steadily at 20 per cent, the impact on balance sheets of banks will be immense.

The SBI chairman has hinted that his bank's balance sheet will grow ten times by 2020. For every hundred rupees loaned out, the bank needs to set aside roughly ten rupees from its capital base.

During cyclical downturns, of which there will be some in the coming decades, the provisioning for bad loans will need more capital. We are in the post-Lehman world in which Basel type of norms are being tightened.

New proposals, recognising the inadequacy of Basel-2 (which required risk-based capital allocation), are asking for higher liquidity and capital cushions. There's no use pussyfooting around norms like Tier-1, Tier-2 capital, since ultimately what Indian banks will need is pure equity capital. Cosmetic solutions like perpetual bonds, or hybrid bonds, or rights issue with golden non-dilutable shares for promoters are only wishful solutions to postpone the inevitable. Basically what we are referring to is the 51 per cent barrier.

Since almost three-fourths of India's banking is in the public sector, defined as 51 per cent ownership by the government, any enhancement of the capital base will require capital infusion by the government. In the next five years alone, the estimates of capital requirement are between Rs 1 lakh crore and Rs 2 lakh crore (Rs 1 trillion and Rs 2 trillion).

How is the government going to bite this bullet? It has competing spending priorities like health and education, NREGA, a growing pension burden, continuing subsidies and a soon-to-be-introduced right to food Bill. Not to mention the yawning fiscal deficit which also needs an immediate correction.

The finance minister would have to perform a miracle to save banks from capital starvation.

This is not a new or unknown problem, but every time it crops up, our policy-makers have tried to wish it away. In the present circumstances too, the government has stopgap arrangements. It is borrowing from the World Bank (that's window-dressing fiscal deficit).

It is pushing for bank mergers, so that some unused or unproductively deployed capital is unlocked. Of course bank mergers are best initiated by the suitors, rather than resorting to gunshot weddings.

The huge pipeline of disinvestment is sure to provide some dough, although there are already too many claimants against that windfall (remember right to food?).

There are better ways of dealing with this upcoming bank capital shortage. The Narsimham-2 committee in 1998 had already flagged the need to allow newer entrants into banking.

The corporate sector, both public and private, has many players who would be eminently eligible to receive banking licences.

Their banking entry should be subject to stiff requirements like minimum net worth of, say Rs 5,000 crore (Rs 50 billion), a strong track record, and compulsory equity dilution within five years to less than, say 20 per cent.

This move alone has the promise of infusing big capital into banking. Our banking regulation is much stronger and independent than it was 40 years ago, hence we must banish and exorcise the ghosts of 1969.

The suspicion of the corporate sector, or fear of connected lending by banks to parent corporate houses, sounds anachronistic today. We have already allowed them in mutual funds and insurance where they thrive admirably.

Indeed, public sector banks themselves have AMC and insurance subsidiaries, requiring substantial capital. Another solution, proposed by a former finance minister in Parliament is to bring public holding down to 33 per cent.

Since this idea has no takers across the political divide, the next best thing is to implement an idea proposed by Dr Rangarajan, the chairman of the Prime Minister's Advisory Council. He has suggested that we widen the definition of public holding by including the holdings of quasi-government bodies like Life Insurance Corporation also in the 51 per cent limit. This can be termed as bank reform by word play! But it is a reasonable political compromise and can bring in private capital, without forcing the government to bring in matching funds.

The year 2009 was when foreign banks expected big-bang reforms easing their entry into Indian banking. That is unlikely to happen, although their enthusiasm and stamina itself may have waned. Besides, the Reserve Bank of India is still going to be guided by the principal of reciprocity when it comes to awarding licences to foreign banks.

So whichever way you look at it, bank capital needs to come from either disinvestment, or allowing entry of newer and stronger non-bank players. Otherwise the lack of this oxygen of capital can choke our 9 per cent growth.

Oh, there is another very big capital constraint faced by public sector banks. That is human capital. In Mumbai, it was revealed that a startling 58 per cent of senior banking executives will retire in the next two years.

The capital constraint, both human and financial, is going to redefine India's banking.

NREGA: How to make it successful