Is the euro overvalued?

An American traveller in Paris or Berlin is continually struck by how high prices are relative to those in the United States. A hotel room, a simple lunch, or a man's shirt all cost more at today's exchange rate than they would in New York or Chicago. 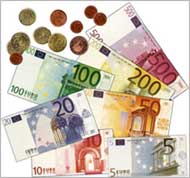 To bring the cost of those goods and services down to the level in the US would require the euro to fall relative to the dollar by about 15 per cent, to around $1.10.

It is easy to jump from this arithmetic to the conclusion that the euro is overvalued, and that it is likely to continue the decline that began last December. But that conclusion would be wrong. Looking ahead, the euro is more likely to climb back to the $1.60 level that it reached in 2008.

There are three reasons why the traveller's impression that the euro is overvalued is mistaken. First, the prices that the traveller sees are generally increased by value-added tax, which is universal in Europe but unknown in the US. Remove the VAT, which is typically 15 per cent or more, and the prices in Europe are similar to those in the US.

Second, the goods and services that the traveller buys are just a small part of the array of goods and services that are traded internationally. The goods that Europe exports include machinery, chemicals, and a variety of other products that consumers do not buy directly. To judge whether their prices are "too high" at the existing exchange rate we have to look
at the trade balance.

Germany, Europe's largest exporter, has a very large trade surplus with the rest of the world. Because German exports are attractive to foreign buyers at the existing exchange rate, Germany in 2009 was the world's second largest exporter (after China).

Germany's exports exceeded its imports by nearly $200 billion in the past 12 months, a surplus equivalent to nearly 6 per cent of GDP. It is clear that Germany's net exports would remain high even if the euro appreciated substantially from its current level.

The other eurozone countries are not as competitive as Germany at today's exchange rate. But the euro area as a whole nonetheless had a trade surplus of more than $30 billion over the past 12 months.

And, with the euro down significantly relative to many other currencies over the past year, Europe's trade balance can increase further in the months ahead. To limit that increase, the euro must rise.

This brings me to the third, and most fundamental, factor that is likely to cause the euro to strengthen substantially from its current level: global economic conditions require the eurozone to have a substantial trade and current-account deficit so that it becomes a large net importer of funds from the rest of the world.

There are two reasons for this. First, the oil-producing countries and China will continue to export substantially more than they import. Their net foreign earnings must be invested in foreign countries' stocks and bonds.

While much of that investment will flow to the US, the surplus countries want to diversify their investment of these new net export earnings. The eurozone provides the only large capital market other than the US for such investments.

But the eurozone can increase its inflow of foreign capital only if it has a current-account deficit, i.e., if it increases its imports relative to its exports. And that will require a less competitive euro - higher relative to the dollar and other currencies.

The flow of net export earnings from the oil producers and others into euros will push up the value of the euro and enable the transfer of funds to occur.

Second, countries with large accumulations of dollar reserves will be shifting substantial fractions of those reserves into euros. Central banks in Asia and the Middle East have traditionally held their reserves in dollars. That made sense when they needed those reserves to be very liquid so that they could bridge temporary trade deficits. But those foreign-exchange balances have grown far beyond the level needed as emergency reserves.

South Korea and Taiwan, for example, have foreign-exchange holdings of more than $250 billion each, and China's holdings total more than $2 trillion. These and other countries with very large foreign-exchange balances are beginning to diversify their holdings from dollars to euros, a process that will continue and that will inevitably cause the euro to rise relative to the dollar.

So, while I will continue to complain about the prices that I face when I travel in Europe, I understand that the prices that matter for trade are more competitive than those that I see when I pay for my lunch.

And I also know that the complementary pressures on Europe to import funds, and on surplus countries to diversify their currency holdings, will make European travel increasingly expensive in dollar terms.

Martin Feldstein, a professor of economics at Harvard, was Chairman of President Ronald Reagan's Council of Economic Advisors and President of the National Bureau for Economic Research.
Copyright: Project Syndicate, 2010.