Has Apple invented a whole new paradigm for computing?

The iPad might allow Apple to disrupt the publishing industry, as it has done with music and telecom already, says Rajeev Srinivasan. 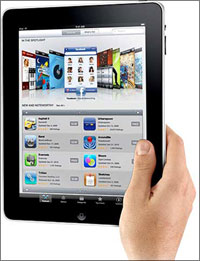 Apple Computer announced on Monday that the iPad had sold 1 million units in just 28 days, notably faster than the iPhone's 74 days.

Although the initial euphoria has died down, it is worth considering if Apple has, true to its image as an innovator, created something truly new and different.

The chatterati are divided: technologists are disappointed by what's not in the iPad, while ordinary users seem pleased that it is easy to use and requires less maintenance than a standard PC.

If the latter are right, then we may have just witnessed the passing of the Windows era of computing. There are persistent problems with the usability of Windows PCs: the system gets bloated and slows down over time. Besides, there are few ways of ensuring that only trusted applications are loaded onto your system.

What the iPad seems to offer is help in both these areas: the system will remain relatively pristine over time, and anyway the applications available have been informally certified under Apple's eagle eye. Of course, this is in addition to the change from the Windows paradigm of mouse-keyboard interaction to the gesture-based touch-screen paradigm.

The touch-screen fundamentally changes man-machine interaction, and it has inherent appeal, as demonstrated by the iPhone and imitators. Thus, Apple has invented something new. But has it also learned the lessons from its previous failure to turn its inventions into commercial success?

The Apple Macintosh, of course, was the original 'computer for the rest of us', but Microsoft stole Apple's thunder, relegating it to an also-ran. A lot of this was based on Apple's excessive reluctance to license its system software.

Intriguingly, Apple started succeeding only when it moved away from product innovation and into business model innovation. Despite cool and elegant products, it kept losing ground to Microsoft, which realized that the operating system was a distribution channel.

Since Windows runs on two billion computers, Microsoft pushed other products through -- Internet Explorer, the lucrative Office franchise, and many thousands of third-party products. Apple could not deliver this large audience -- size matters -- and software makers began to build products only for Windows. This became a vicious cycle, and Macs became niche boxes.

With the iPod, Apple turned this game on its head using iTunes. iTunes was the real breakthrough, not the iPod itself: business model, not product innovation. With iTunes, Apple began distributing third-party products, including music, movies, and podcasts. The operating system became less relevant. iTunes is the third most ubiquitous software product around, after Windows  and Adobe's Acrobat. Result? Apple has become the world's biggest music distributor.

Incidentally, they sold a lot of iPods too, which of course, was their goal. For the end-user, it suddenly became easy to pick up music that was legal and inexpensive, and so they did, abandoning illegal downloads.

Similarly, with the iPhone, it is not the touch-screen that made the product successful, but the App Store: an easy-to-use distribution channel for third-party applications. It was not a new concept. In the smartphone/PDA space itself, there was a Palm Store as long ago as 2000, with a few thousand applications.

However, Apple was the first to enjoy the network effects and has 180,000 applications now.

It is this ecosystem that counts today. The fact that the App Store reduces the amount of marketing that a software developer needs to do means they can concentrate on what they know best: product development.

This holds promise for Indian software makers -- if you build something attractive, the App Store may take care of marketing and distribution, which has been your Achilles heel.

It is a positive feedback loop -- the more apps there are, the more people buy the platforms, and the more new apps are developed. Microsoft once lured away software developers to Windows from the hitherto reigning champions, Unix-based systems from HP, Sun, IBM, et al.

Now Apple is repaying them in the same coin.

This is not to say that everything is perfect: Apple exerts extraordinary control over the environment and the ecosystem. Third-party software developers have to abide by Apple's rules, which may be draconian. It recently began to insist that developers must only use Apple's own development tools; they are also forbidden from building multi-platform apps (for instance Adobe's Flash).

Nevertheless, the long-awaited convergence between telephony and computing has been given a fillip by Apple's new products; the debate over whether the right product for the vast emerging markets is a low-powered PC (as the One-Laptop-Per-Child initiative believes) or a souped-up phone is a moot point now.

The phone is the computer, to paraphrase an old Sun Microsystems dictum.

The iPad, which is basically a large-screen iPhone, may come into its own with the consumption of media content. Thus, the phone may be the newspaper, in addition to the electronic book reader and the music player.

Furthermore, as mobile payments become more widespread -- early experiments in Africa have been encouraging -- the phone can become the wallet, too.

It would be poetic justice if Apple rides in like a white knight and rescues the publishing industry. The iPad may allow Apple to disrupt one more industry, as it has done with music and telecom already.

There are downsides -- publishers may discover they don't like ceding too much power to Apple. And as far as consumers are concerned, especially those in emerging markets, they may find themselves priced out of a lot of currently free content.

There is the possibility that Apple will not end up holding monopoly power as the industry evolves. As it is, Google with its Android system is showing itself to be a worthy competitor.

The entry of powerhouse Hewlett-Packard into the fray with its purchase of stumbling smartphone pioneer Palm is a new factor. And let's not count out traditional market-leaders such as Nokia and Motorola, or new players like HTC.

Clearly, we live in interesting times, and consumers and software developers are the ones benefitting the most.

HTC to fight against Apple's lawsuit