Greece crisis and the consequences for India

If the Greek crisis spirals into a larger European sovereign debt crisis and possible fragmentation of the eurozone, India's trade and capital flows could be hit, says Shankar Acharya. 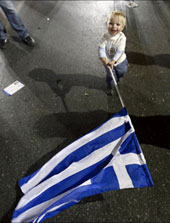 Back in January, during a discussion with this paper's editorial brains trust, I had mildly suggested an edit on the emerging Greek budget problems and its wider consequences.

This was greeted with indulgent smiles and suppressed mirth of the kind usually reserved for doddering uncles. Which reader would be interested in the fiscal predicament of a small and distant European nation?

Some four months later, I confess to a feeling of vindication. Greece's public finance problems have ballooned into a major European crisis with global ramifications. The evolution of the crisis has accelerated over the last fortnight and sent world financial markets into a tizzy.

Today, Greece is in a bad place. Its GDP fell by 3 per cent in 2009 and is expected to drop another 4 per cent this year. Its fiscal deficit of 13.6 per cent of GDP in 2009 is slated to be brutally chopped to 3 per cent of GDP by 2014 under the huge euro 110 billion EU-IMF bailout programme agreed early last week.

Despite such extraordinary fiscal compression, Greece's towering 115 per cent ratio of government debt to GDP is expected to climb to nearly 150 per cent in three years.

GDP is expected to contract a further 5 per cent by then. As Martin Wolf has pointed out (Financial Times, May 5), even if everything goes according to plan, in 2014 Greece will be having to run a 4.5 per cent of GDP primary fiscal surplus to service the 7.5 per cent of GDP of interest payments on its government debt.

Will Greeks put up with the deep and sustained cuts in public wages and pensions, and massive hikes in taxes that all this entails?

Commentators (and markets) are sceptical. They point out that if Greece had faced a similar problem 12 years ago, the obvious solution would have included devaluation of the drachma and a restructuring of the debt (an euphemism for organised, partial default).

Today, being a member of the eurozone rules out devaluation. And debt restructuring for Greece would fan the flames of contagion that are already warming Portugal, Ireland, Spain and Italy (the other PIGS).

Herein lies the rub. Greece is missing crucial options for adjustment because she is an eurozone member. Conversely, the likely political and economic infeasibility of Greece's harsh fiscal compression programme is damaging Europe by sustaining the threat of contagion and calling the entire single-currency experiment of the euro into question.

And this is why the travails of little Greece (with GDP equal to about one-fortieth of the European economy) are plaguing the European Union, still the largest single economic entity in the world.

A dozen years ago, many had doubted that a monetary union could be sustained without a fiscal union. Analysts, such as Paul Krugman, have pointed out that California's major fiscal problems are containable precisely because US federal fiscal policy cushions their impact on both Californians and the rest of the US. The euro-sceptics are waxing eloquent today.

How will all this pan out? The honest truth is that nobody really knows. The crisis is still unfolding. And fast.

Recall that hardly three weeks ago, Europeans were still negotiating over a euro 45 billion bailout package for Greece. Months of dithering by Germany and others helped catalyse the recent downgrades by credit rating agencies, which amplified the Greek problem and its contagion potential, and nearly tripled the scale of the final package.

That didn't prevent international financial markets and the euro from plunging towards the end of last week, triggering a weekend of frenetic activity among European leaders, with stiff doses of advice injected by the Obama administration.

The result was the announcement on Monday, May 10, morning of the mammoth euro 750 billion EU-IMF standby, bailout package of loans and guarantees plus the European Central Bank's (ECB's) arm-twisted readiness to purchase European debt for quantitative easing.

After an initial, reassuring bounce, international markets again turned jittery on Tuesday, underscoring the continuing doubts about a lasting resolution of the fiscal-debt problems of Greece and other PIGS.

There is a chance that the Greek polity will accept the fiscal compression demanded. It's possible that contagion (much of it irrational and fuelled by financial herd behaviour) will be contained through wise, anticipatory policy by the governments of Spain, Italy, Portugal and Ireland, and adroit actions by ECB and the European Union.

In that case, just maybe, European recovery from the Great Recession will simply stutter a bit in 2010 and then resume the positive trajectory outlined by the IMF's World Economic Outlook of late April.

The problem is that such wisdom and courage, if shown, will need to be sustained. And the track record, thus far, is not wholly reassuring.

Thoughtful analysts believe that there is a better than even chance that something major will go wrong in the many weeks and months of fiscal and financial stress that lie ahead for Europe. Then the unthinkable might happen: Greece could leave the eurozone or default or both.

In that case, contagion could spread across Europe and undermine otherwise healthy economies. No realistic estimate can be made presently of the pan-European and global consequences of such events.

But the continuing turbulence in financial markets worldwide suggests that people are thinking about the unthinkable and its consequences.

What are the possible consequences for India? It's too early to tell but one can speculate. If the crisis is successfully contained and European recovery resumes, then there may be no significant external trade shock to India.

With more money sloshing around in international markets, capital inflows into India will grow and exacerbate the already big problem of a substantially overvalued rupee. Oil prices will resume their upward march and magnify India's petroleum subsidies and fiscal stresses.

At some point, perhaps quite a few months later, the unsustainability of India's fiscal, debt and external current accounts will come home to roost.

On the other hand, if the Greek crisis spirals into a larger European sovereign debt crisis and possible fragmentation of the eurozone, then global trade and capital flows will be badly hit.

How badly and how much this will hurt India is impossible to assess at present. The only silver lining could be a drop in international oil prices, implying a lower oil import bill and reduced petroleum subsidies for India.

Either way, macroeconomic policy will be exceptionally challenging in the months ahead. Let's hope the ministries and institutions responsible for the conduct of India's macroeconomic management can summon the requisite competence and will.

The author is honorary professor at ICRIER and former chief economic adviser to the Government of India. The views expressed are personal.