News
Business
Movies
Sports
Cricket
Get Ahead
Money Tips
Shopping
Sign in  |  Create a Rediffmail account
Rediff.com  » Business » Hiring up by 8% in Bangalore

Hiring up by 8% in Bangalore 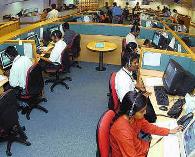 Hiring activity continued to surge in the country's IT capital with the job index moving from 598 in October to 649 in November 2009, up by 8.38 per cent.

Prominent industries in Bangalore which witnessed a rise in hiring activity include IT and ITeS.

The IT industry overall saw an increase in hiring activity in November 2009 by 5.35 per cent,, Naukri JobSpeak, the monthly job index released by job portal Naukri.com, said.

Hiring for IT professionals is 'back' after the dip in October 2009 with an increase of 7.8 per cent and 21.8 per cent in the index of IT-Software and IT-Hardware professionals in November'09 compared to the previous month, it said.

Source: PTI© Copyright 2021 PTI. All rights reserved. Republication or redistribution of PTI content, including by framing or similar means, is expressly prohibited without the prior written consent.
Related News: IT, Naukri JobSpeak, Bangalore
SHARE THIS STORY
Print this article

Autorickshaws to go green in Bangalore