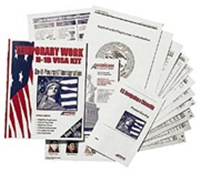 After months of muted response, applications for H-1B work visa to the US, popular among Indian professionals, have reached its Congress-mandated cap 65,000 with the last two months witnessing a spike in demand.

The US Citizenship and Immigration Services (USCIS) on Thursday announced that it has received sufficient number of applications to reach the mandated cap of 65,000 for working professionals for the fiscal ending September 30, 2010.

"USCIS is hereby notifying the public that Dec 21, 2009 is the final receipt date for new H-1B speciality occupation petitions requesting an employment start date in FY 2010," an official statement said.

Once it started accepting H-1B petitions on April 1, the USCIS had received 45,000 applications till the middle of May.

Thereafter it took nearly seven months to fill the rest of the 20,000 slots, a sizeable number of which, in fact, were received in the last few weeks.

It is for the first time in several years that the USCIS has announced that it has reached the cap at the fag end of December.

For the past several years, it was filled up in the first few days only and the USCIS had to resort to computerised draw of lots to determine the successful applicants.

USCIS has also received more than 20,000 H-1B petitions filed on behalf of persons exempt from the cap under the "advanced degree" exemption.

Source: PTI© Copyright 2020 PTI. All rights reserved. Republication or redistribution of PTI content, including by framing or similar means, is expressly prohibited without the prior written consent.
Related News: USCIS, H-1B, US Citizenship and Immigration Services
SHARE THIS STORY
Print this article