The Fund has sold the gold so as to increase its capacity to lend money to poor countries at concessional rates. 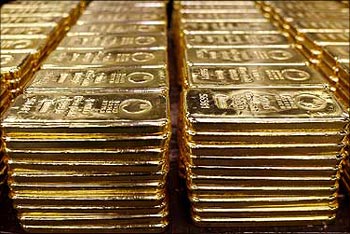 The International Monetary Fund has sold 200 metric tonnes of gold to the Reserve Bank of India for about $6.7 billion, in a bid to increase the Washington-based financial institution's capacity to lend to poor nations.

The IMF targets to sell about 403.3 metric tonnes of gold to shore up its finances so that it can lend money to the poorest countries at concessional rates.

"This transaction is an important step toward achieving the objectives of the IMF's limited gold sales programme, which are to help put the Fund's finances on a sound long-term footing and enable us to step up much-needed concessional lending to the poorest countries," IMF Managing Director Dominique Strauss-Kahn said.

The transaction, which is still in the process of being settled, was carried out on a daily basis over a period of two weeks October 19-30. Each daily sale was conducted at a price set on the basis of market prices prevailing that day.

"The total sales proceeds are equivalent to $6.7 billion or SDR 4.2 billion," the IMF said. The sale was concluded at an average price of about $1,045 an ounce.

As per IMF rule, all gold sales must be conducted at prices based on market prices, including direct sales to official holders as in the case of this transaction.

At its meeting on September 18, the IMF executive board had approved to sell 403.3 metric tonnes of gold, which is one-eighth of the Fund's total holding, to increase the its resources for lending to low-income countries under a strategy endorsed by the board in July.

The speed of the sale surprised traders who expected China to be the buyer. With this buy, the Reserve Bank of India now has the world's tenth largest gold holdings among central banks.

Why NSE didn't switch to disaster recovery site on Wed

In one of worst daily falls, Sensex tanks 1,939 points