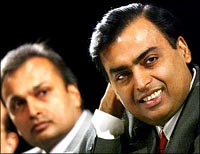 The government on Tuesday opened its arguments in the high-voltage gas row between the Ambani brothers in the Supreme Court asserting that any understanding reached between them was not binding on it as gas was not their "private property".

"It (gas) is not the private property of RIL or RNRL. It is a national asset," Additional Solicitor General Mohan Parasaran said while presenting the government's case before a Bench headed by Chief Justice K G Balakrishnan.

No sooner had the government commenced its arguments after RIL completed its submissions, than RNRL's counsel Ram Jethmalani raised objections to the petroleum ministry being allowed to be heard as a party to the dispute.

He said the ministry had dropped its prayer in the Bombay high court to be included as a party and was only accepted as an intervenor.

Countering RNRL's stand, Parasaran said the government has every right to be a party as gas is a national asset and a natural resource.

"RIL (Mukesh Ambani's group) and RNRL cannot settle between themselves as to how the gas, which is a national asset and a natural resource, which vests in the government and which is to be utilised in the welfare of the nation, is to be distributed.

"It is not the private property of RIL or RNRL and any understanding arrived at between them is not binding upon the government," he said before the Bench, also comprising Justices B Sudershan Reddy and P Sathasivam.

RIL's gas output to double by next fiscal