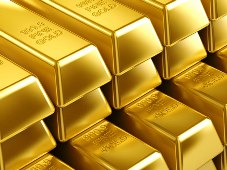 Blaming a rush of investor-buyers for pushing gold price to over Rs 17,000 level, market experts see the yellow metal getting cheaper by about Rs 500 per ten gram by next week on profit-booking.

Investors are expected to book profits after the recent record-breaking rally, and would come down to below Rs 17,000 level soon, according to analysts.

"The precious metal is highly volatile at the moment. However, this trend may last till this week before taking a consolidation. Gold prices are likely to take a correction after Friday to Rs 16,900 level," said Religare Commodities' metals and energy in-charge Somnath Dey. Gold on MCX for December delivery was trading at Rs 17,131 per 10 grams on Wednesday.

The yellow metal on Wednesday hit a new record at the New York Mercantile Exchange at $1,148.10 an ounce (28.34 grams) for the December delivery following a 0.37 per cent dip in the dollar index.

The price volatility is mainly on account of continued weakness of the dollar and the recent selling of 200 tonne gold by the IMF to the Reserve Bank to raise money for lending to poorer countries, he said.

According to brokerage firm SMC Global's Rajesh Jain, gold is likely to consolidate within the Rs 16,800-17,400 range in the domestic market as it is overbought now.

At the moment high prices are getting support from weakness in the American greeback. In the international market gold may trade between $1,090-1170 an ounce range, he added.

The spike in gold price is also attributed to the reports to the effect that many central banks are showing interest in increasing their reserves, a bullion analyst at Karvy Comtrade pointed out.

He said recently the Mauritius government bought two tonne gold from IMF and Sri Lankan also disclosed that it has been gradually buying gold to increase its reserves, which all together helped spike th price.

Investing in gold? Some tips