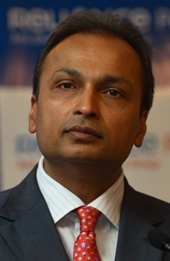 Anil Ambani led RNRL on Tuesday asserted in the Supreme Court that family MoU of 2005 was a 'sacrosanct' document for resolving the gas row with Mukesh Ambani group RIL and accused it of scuttling efforts to arrive at a bankable agreement for the supply of gas from KG Basin.

The arguments in the high-voltage bitter legal battle for the first time saw Anil Ambani sitting during the court proceedings throughout the day.

Besides MoU, the RNRL said it wants to strictly comply with the NTPC document which evisaged the supply of gas to the PSU at $2.34 per mmBtu by the RIL.

He said under the MoU, mother Kokilaben Ambani has the power to give directions for working out the MoU which was practically to be given the shape of the scheme for demerger.

"The MoU was to be given a shape for technically feasible and commercially viable gas supply production agreement which has to confirm to the NTPC document.

Our purpose was that the GSPA consider the NTPC draft which is the best," Jethmalani said while countering RIL's argument that the family MoU was not binding for arriving at suitable arrangement for the supply of gas.

"How can they say MoU is not binding," Jethmalani said before the Bench, also comprising Justices B Sudershan Reddy and P Sathasivam and alleged that till the negotiations were going on for arriving at the bankable contract, RIL never raised the issues of Production Sharing Agreement or the approval of price for the supply of gas by the government.

"The other side (RIL) later came out with bogus arguments of PSA and price approval by the government," he said adding that there was no dispute on the price, duration and quantum of gas to be supplied.

"Throughout the negotiations there was no reference of PSA or Government approval relating to price between the two companies. Time and again they (RIL) said they are trying to evolve bankable arrangement," Jethmalani said.

The Ambani brothers are engaged in a court battle over the supply and price of the gas from KG basin.

While RNRL is seeking gas at a committed price of $2.34 per unit, RIL says it cannot honour the commitment made in the family agreement due to government's pricing and gas policy.

Jethmalani blamed the RIL for creating roadblocks for the RNRL's Rs 22,000 crore (Rs 220 billion) proposed power plant in Dadri in Ghaziabad district of Uttar Pradesh for which the gas was to be supplied from the KG Basin.

"The Directors (of RNRL) required Rs 22,000 crore (Rs 220 billion)to raise the proposed project. We needed the bankable agreement or contract which was to be according to the international trading practice," he said.