Pranab plays down Dubai crisis, says nothing to worry 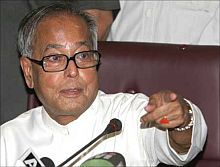 Asserting that there is no need to press the panic button, Union Finance Minister Pranab Mukherjee on Saturday said the Dubai debt crisis would not have 'earth shaking' impact on India's economy.

"The full impact of the Dubai debt crisis is yet to be assessed, but there is no need to press the panic button," Mukherjee told mediapersons on the sidelines of a function in Chandigarh.

To draw his point, he pointed out, "First of all, the amount is small and secondly, the exposure of our banking systems to the Dubai financial systems is limited."

He, however, said that 'some adverse effect' will be there initially on the stock markets, as was felt on Friday. The finance minister has also opined that the crisis will not have much impact on the country's exports to the region.

Mukherjee, however, said that the debacle will impact the repatriation of foreign exchange from there and joblessness in the Gulf city-state. On the issue of the large number of Indians working in that city, he said, "It will have to be seen how this will affect Indians working in Dubai."

He, however, sounded confident saying, "I don't think it will have much effect on Indian workers in that country." The Indians constitute as high as 42.3 per cent of the population of Dubai, he added. The minister said the situation after the Dubai debt crisis is 'manageable' and added that the government would keep a watch on the situation.

On the issue of climate change, he said, "There should be a common and differential approach towards climate change depending on each country."

Earlier delivering the Haksar Memorial Lecture on 'Asian economy after the financial crisis -- an overview', he said it might be too early to speak about Asia after the crisis, though green-shoots of growth have certainly started to appear.

"It is difficult to definitively say that the crisis is firmly and surely behind us," Mukherjee added. With the growth decelerating from 5.1 per cent in 2007 to 3.1 per cent in 2008, the world economic output got severely affected by the outbreak of the global financial crisis, he said.

Global financial markets started to show disquieting signs from mid 2007, the minister said, adding, that before the crisis struck Asia, speculation was that as Asian countries had made considerable progress in developing their domestic institutions, policies and industrial capacity, the region had 'decoupled' from advanced economies of North America and Europe.

But the 'decoupling hypothesis' would have held only if an 'economy had broadened and deepened to the point that it no longer depended on the United States for exports or capital flows and higher domestic demand substituted for the decline in exports to the US,' he said.

"More dependent or linked an economy was with the US economy, higher was the impact of the crisis on that economy. The fall out of the current crisis for example, in the Eurozone area and Japan, was more severe than in the US," he said, adding the developing countries in Asia, including India, did get affected by the crisis.

"Even, among the developing countries of Asia, in terms of growth impact of the crisis, South Asian economies appear to have been the most resilient so far," he said.

The finance minister said the important lesson learnt from the current crisis was that Asian economies were not decoupled from the rest of the world.

"Good fundamentals, in turn, provided scope for strong policy responses in many countries, including fiscal programmes, supplemented by accommodative monetary and bank lending policies," he said, adding, that these stimulus packages provided a boost to domestic demand throughout the region.

On the domestic economy, he said, "Our economy has shown remarkable resilience to the crisis, because the financial system had no exposure to the toxic assets."

The Reserve Bank of India had also taken pre-emptive steps to contain bank exposure to real estate bubble in the domestic economy, he added.

The initial shocks affected the economy through the slowdown and reversal of capital flows, which impacted the stock markets and exchange rates, he said, adding, that thereafter, the real economy was affected through slowdown in exports, reduced investment activity and general risk aversion.