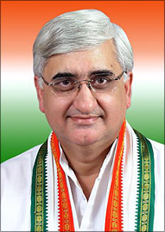 Having launched an austerity drive to check public expenditure, the government has advised India Inc to refrain from doling out "vulgar" salaries to CEOs.

"I think when we are working on this (austerity), we can hardly say that we (will) shut our eyes on what salary the CEOs are going to take," Corporate Affairs Minister Salman Khurshid told PTI, when asked how the government intends to control salaries of CEOs which at times appear vulgar.

Pointing out that salaries of CEOs should be decided by shareholders, he said, "I don't think anyone in India today, in politics or outside politics ...has reached the level of liberalism where vulgarity is also a fundamental right."

"A minister should not be judging who deserves what salary. We are moving away from control to regulation. But it doesn't mean that you are going to be completely free," he said.

The issue regarding remuneration of company CEOs will be debated by the parliamentary standing committee which is scrutinising the provisions of the new Companies Bill tabled in the Lok Sabha in August, he said.

"Let's get the opinion of the standing committee (on the Bill), then we will move forward," he said, pointing out that "it's now before the same Parliament that has supported this attitude of austerity ... Let us see what their views are."

The annual remuneration of some CEOs work out to be Rs 50 crore (Rs 500 million), which is more than 12,500 times the per capita income in the country.

Under the present Companies Act, companies have to take approval of the government before raising salaries of directors, if the increase is beyond a threshold.

Noting that the issue of CEO's pay packages cannot go unnoticed, Khurshid said, "Prime Minister's indication to industry (has to be taken)... With paramount importance today, particularly we are trying to promote, inculcate a culture of austerity."

"Nothing is to been in isolation. We have to see on what accountability and what responsibility is to be imposed on directors, CEOs of companies. We still haven't taken a final view on whether two persons can be taken as chairpersons and managing directors," the minister said.

Remuneration should commensurate with the qualifications of the individuals and time they spent, he said, adding there should be transparency in the working of various committees of a company.

Referring to the austerity drive of the government, the minister said, "Our programme is not only about rules alone. Our austerity programme is about an attitude - a culture of non-vulgarity, of posterity, of simplicity and it has nothing to with the tickets that you buy, the seat in which you travel."

"It is also to do with how you conduct yourself, how you behave, what you wear, what you do, what you speak and eat. It must be a pervasive culture. You are travelling economy class but you go and have a bash where people are going hungry, is I think, immoral," he added.

The UPA leadership is telling people to inculcate a temperament of austerity and simplicity, he said, adding "the rules not just for 10 months ... They are only indicative. This is something of a permanent nature".

The government as part of the austerity drive asked the ministries to refrain from organising conferences in five-star hotels, avail concessional air tickets being offered by Air India and ensure 5 to 10 per cent cut in non-Plan expenditure over what has been approved in the Budget for 2009-10.