Acknowledging that the global economy appears to be emerging from the worst financial and economic crisis in the post-war period, the International Monetary Fund managing director, Dominique Strauss-Kahn on Friday said the recovery will be sluggish and that a jobless recovery remains a risk. 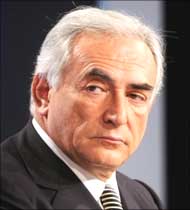 Delivering the 2009 Bundesbank Lecture in Berlin, Strauss Khan argued that the stimulus measures adopted by countries to combat the global crisis should be withdrawn only when the economic recovery has taken hold and unemployment is set to decline.

"I am concerned about the social and economic costs of high unemployment, which will persist even as financial markets and output stabilizes," the IMF managing director said.

Given the fragility of the recovery, Strauss-Kahn warned that "Policymakers should err on the side of caution as they decide when to exit from their crisis response policies."

However, governments should develop their exit plans now so that they are able to build public support and act when the time is right, he said.

Strauss-Kahn underlined that international policy coordination has been an essential part of the response to the crisis and that "coordination of exit strategies will be just as important."

Thanks to concerted and forceful policy actions, the crisis had been contained, he said. Expecting recovery to be relatively sluggish, he said in the advanced economies, it is still largely driven by policy stimulus and restocking, with underlying private demand remaining weak. The outlook for the emerging economies is considerably better, though the pace of recovery in advanced trading partners remains a risk, he said.

In his address the IMF managing director said there needs to be focus on three policy areas which are essential to ensure a sustainable recovery - identifying new source of growth, reforming the financial sector and strengthening the international monetary system.

While noting that many proposals had emerged for reforming the international monetary system, he said "the current system, despite its problems, is working better than is often said." The US dollar had actually strengthened during the crisis, which in his view "reflects the dollar's status as an unrivalled safe haven asset."

To make the international monetary system more stable, he emphasized that reducing countries' demand for reserves and strengthening insurance mechanisms would be essential.

The IMF could play an important role in this regard and ideas that could be explored include: making access to its funding more predictable; making Special Drawing Right allocations more responsive to global developments;and increasing the Fund's resource base.

Expressing concern that the improvement in financial markets "is leading to complacency in dealing with remaining and difficult problems in the banking system", he urged policy makers to remain focused on the crisis response agenda, which includes undertaking a comprehensive diagnosis of banking systems and launching asset-management programs to deal with banks' bad assets.

Strauss-Kahn also called for a global rebalancing of demand across countries, which would require strong policy actions - including fixing the financial system in advanced economies and boosting domestic spending in emerging Asia.

No plan to borrow; we can give money to IMF: PM