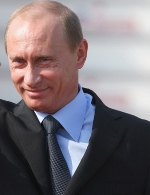 Russia has overcome recession but this does not mean that economic crisis in the country is over, Prime Minister Vladimir Putin said on Tuesday.

"Preliminary results of the first quarter of 2010 are encouraging as industrial growth is at 5.8 per cent and real income of the population has increased by 7.4 per cent. In 2010, the GDP should grow by 3.1 per cent.

"These figures tell us that the recession in the Russian economy is over. Moreover, we have a good starting point to move forward," Putin said in his annual report to State Duma (lower house of the Russian Parliament).

In his second annual address to the house, Putin said that the government intends to return the economy on the "trajectory of sustainable growth", take measures to build new industrial potential and support innovation.

"The basic conditions for future development are responsible macroeconomic policies and a balanced budget. We can't afford to live with a constant 6 per cent budget deficit. Otherwise, we'll find ourselves in a debt trap," he said.

Putin said his government was intended to reduce the budget deficit to 3 per cent of GDP by 2012, eventually returning to a deficit-free budget that would allow the country to again build up its international reserves.

At the time of global downturn last year, he said Russia was the only country in the world to carry out large-scale anti-crisis measures without any cuts in social spending and implemented major hike in the pensions.

Instead of sequester the government opted to redistribute budget expenditures and funds with the emphasis on social programmes as a result actual spending increased 27.4 per cent in 2009, despite a 29 per cent drop in revenues, he said.

Russia was hard hit by the economic crisis with its GDP shrinking to 7.9 per cent in 2009.  In an effort to strengthen the parliament's role in the political structure of the country, after his election in 2008 President Dmitry Medvedev had enacted a law making it mandatory for the prime minister to present annual report to the State Duma.