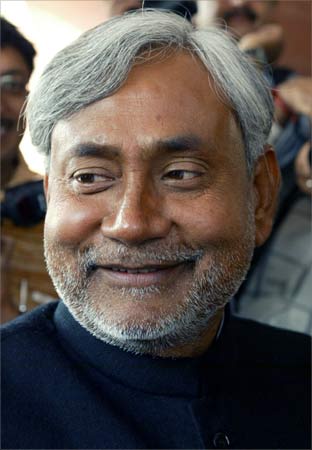 It may surprise many that economically backward Bihar emerged as the fastest growing state clocking a growth rate of 11.44 per cent during 2008-09.

Among the 18 states and Union Territories of which data is available, Bihar recorded the highest State Gross Domestic Product (SGDP) in a year when the global financial meltdown pulled down country's economic growth rate to 6.7 per cent from 9 per cent.

According to a recent report compiled by the Central Statistical Organisation (CSO), which has data on 18 out of 32 states and Union Territories, Bihar recorded the highest growth of 11.44 per cent in the last fiscal.

Among the major states, growth data was not available for Gujarat and Maharashtra.

He further clarified that the data is based on information provided by the state themselves and it would be not correct to attribute it to the CSO.

"CSO does not provide state GDP data. There is an arrangement between CSO and states. Under this arrangement states themselves provide their economic (GDP) growth data (projections) which is made public by the CSO. This data is not authenticated by the CSO," Sen said.

Bihar even set a record of sorts during 2006-07 by clocking a 22 per cent SGDP, an indicator of the economic activity in the state.

Among the major states, Andhra Pradesh posted a growth rate of 5.53 per cent, Haryana 8.02 per cent and Karnataka 5.08 per cent.

Commenting on the GDP numbers of Bihar's Deputy Chief Minister Sushil Kumar Modi had said on Sunday that "Bihar is the new miracle economy of the country."

Modi had said in a statement that the state witnessed 5.15 per cent negative growth during 2003-04, under the rule of RJD, when Rabri Devi was the chief minister, adding this high growth had been achieved under the regime of Nitish Kumar who took over the reins on November 25, 2005, he said.

The achievement has proved beyond doubt that good governance could work miracles even for a most backward state like Bihar, he had added.

Modi had further said the Opposition which often made unjust comments on the economic status of the state should take a lesson from the CSO report.

Meanwhile, Bihar Chief Minister Nitish Kumar said in Patna that sweeping economic reforms undertaken by his government and increased agricultural production have enabled the state to achieve a growth rate of 11.03 per cent during the period between 2004-05 and 2008-09 (in 2008-2009, Bihar grew at 11.44 per cent).

"Improved law and order situation has attracted industrialists to invest in the state contributing to its economic growth," Kumar told reporters at his Janata Darbar.

According to the Central Statistical Organisation, Bihar was the fastest growing state with a cool 11.03 per cent GDP during the period between 2004-05 and 2008-09, a tad below Gujarat with 11.05 per cent. Again the state's GDP growth in 2008-09 was the highest in the country with an astonishing 11.44 per cent, according to the CSO figures.

Lauding the stupendous achievement of the state, the CSO remarked "Bihar is the new miracle economy of the country," Bihar Deputy Chief Minister Sushil Kumar Modi had said on Sunday while releasing the report.

Seeking Central help to further the development of the state, Kumar said if special category status is granted to the state, Bihar will do wonders as several entrepreneurs come to the state to avail of tax concession under this.

The Centre should immediately clear Rs 14,880-crore (Rs 148.80 billion) special package sought by the state for infrastructure development in the five districts ravaged by the Kosi deluge in 2008, the chief minister said.

Referring to the opposition's tirade for on the economic status of the state, Kumar said even Nobel laureate Amartya Sen showered praised his development works.

The Bihar chief minister said the Centre should compensate the money spent for the flood relief in 2007.

Accusing the Centre of creating hurdles in the state's endeavour for industrial development, Kumar said the Centre was sitting over for the past two years on the amended bill on the Bihar Sugarcane (Purchase and Supply) Regulation Act of 1981 to produce ethanol from sugar cane.

He said the Bill was sent to the Centre in April 2007, but the state is yet to get response till date, blocking several investment proposals in the sugarcane sector.

"I am hopeful that the Centre will react positively to state's demands and a petition with 1 crore (10 million) signatures will be submitted soon demanding special category status to Bihar," he said.