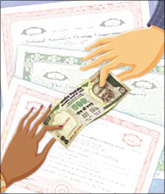 Here's some good news for investors in stocks and mutual funds. If you want to raise money real fast and, that too, at a cost lower than personal loans, you can pledge yours shares to various private or public sector banks and immediately receive a loan/overdraft facility to tide over your cash crisis.

By giving a simple lien on your shares to the bank, you can continue to let your shares and mutual fund units compound your investment. You don't have to sell your shares or redeem funds and book a profit (or a loss), especially if you are a long-term share or unitholder.

Among the ways in which banks offer you quick credit is through an overdraft facility on your bank account, or a plain-vanilla loan on your investment in shares and mutual funds.

If borrowing is the last resort to fund your need, then overdraft against shares is preferable to personal loans as it is cheaper by around 100 to 200 basis points in terms of interest cost.

Says Satkam Divya, managing director and CEO, Rupeetalk.com, "An overdraft against shares makes you pay interest only for the amount you utilise, which could be far lower than your drawing power. But in a loan against shares, you might not be optimally using all the money, but would still end up bearing an interest cost for the entire sum borrowed."

When you pledge your shares or units to the bank, you can still enjoy all the dividends and bonus shares, and also get to retain the ownership. It is an option for meeting a contingency, but is best avoided to meet consumption expenses.

If you are expecting funds to come in at a future date, but have cash constraints at present, you could go for this option and pay off the overdraft at the earliest. An overdraft account will be opened in your name and you would be handed a cheque book and an ATM card.

You won't get a loan on all your stocks. Banks are choosy about the securities they take as collateral. They consider parameters like market capitalisation, volatility in stock price and liquidity of the stock. Most large company stocks qualify for pledging with a bank.

The list varies with banks. ICICI Bank, for example, offers this credit against more than 800 companies comprising large caps, mid caps and even small caps. It also offers a list of about 700 mutual funds.

The tenure of the overdraft facility varies from bank to bank. While some offer it on a continued basis, others like HDFC Bank require you to renew the facility every year.

Banks also have criteria regarding the minimum and maximum amount of overdraft that could be availed. The range is usually between Rs 50,000 and Rs 2000,000. The overdraft limit is around 50 per cent of the value of securities pledged.

The rate of interest varies between 12 per cent and 15 per cent per annum. The higher the amount you avail, the more you could negotiate on the interest rate.

Usually, select public sector banks offer loans against shares, which is different from an overdraft facility.

Here, too, the sanctioned amount is around 50 per cent of the value of the pledged shares. PSU banks also look at your borrowing capacity before sanctioning the loan, which is to be settled in regular monthly instalments.

Unlike in overdrafts, the bank might want to know the purpose of taking the loan. They, too, maintain a list of stocks and units against which they extend credit. For both the above products, processing fees is levied in the range of 1.0-1.5 per cent of the sanctioned limit. It could be even lower in some cases.

There is no foreclosure penalty in either of them. While getting the credit sanctioned, you need to submit your latest demat statement and a pledge form provided by the depository participant, mentioning the shares that are being pledged.

You also have to submit a copy of your PAN card, address proof, income proof and three months' bank statement.

The perils of overdraft

Since the value of the portfolio of equity-based securities fluctuates with daily movement in stock prices, banks review it every week and revise your overdraft limit accordingly.

If the value of your portfolio depreciates, you will have to make good the difference in the amount of loan that you take. For example, assume the bank offers you a 50 per cent credit on 1,000 shares worth Rs 200,000.

If the price falls by 20 per cent, the bank will ask you to put up Rs 40,000 to keep their margin on the overdraft at 50 per cent. If you don't, the bank will sell your share, of course, after sending you due reminders.

You also need to pay the interest instalment every month. If you fail to do so, you will get a reminder call from the bank. If you don't make the payment even then, the bank may sell the pledged shares. But usually, enough time is given to the borrower before taking such an extreme step.

Some investors might be tempted to use this facility to further invest in the stock market. This is a high-risk strategy.

If the market corrects, then not only would the value of your newly-bought shares (as well as the previously held) depreciate, but you would also have to replenish the overdraft account to align with the reduced credit limit.

This could put you in a tight liquidity position. Secondly, one would have to earn returns at a rate significantly more than the cost of capital, which is as high as 12-15 per cent in this case.

ICICI Bank allows you to even sell your pledged shares against which you are drawing an overdraft. However, the money realised will be credited to your overdraft account only and can't be routed to any other savings accounts.

Let's say your drawing limit is 50 per cent or Rs 500,000 against securities pledged worth Rs 1000,000 (Rs 1 million) and you are fully utilising the overdraft facility. If you sell pledged shares worth Rs 200,000, your overdraft drawing power would come down to Rs 400,000 since your portfolio size has come down to Rs 800,000 after the sale. Your outstanding balance, after the sale of shares, would be Rs 300,000 as the amount realised from the sale has been allocated towards settling part of the outstanding balance.

Now, you can still borrow Rs 100,000 more as your drawing power post the sale of shares is Rs 400,000 and your outstanding balance is Rs 300,000. You can maintain your demat account with any bank or even stockbrokers, and not necessarily with the lending bank.

Is it for you?

Opinions vary across experts. Says financial planner Amar Pandit: "It's advisable to sell your shares rather than drawing an overdraft if the market is trading at optimum valuations. I wouldn't go for an overdraft with the Sensex at 21,000 levels. I would only consider going for it if the market has corrected sharply and share prices are hovering around bottom levels, or putting it in context, the Sensex is trading around 8,000 levels."

However, before you pledge your investments in shares and mutual funds, there are investments in your portfolio that you should raise funds against first.

To start with, raise funds against your investments in bank fixed deposits and small saving options. Then you should take the help of your insurance policies.

The reason for touching these investments is that their value is not as volatile. But the key is to get rid of this loan as soon as possible.